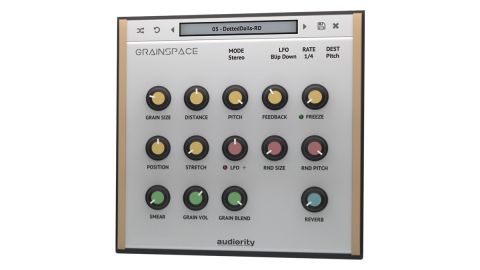 Easy to use and full of sonic surprises, GrainSpace is a wildly creative glitching and texturising toolbox that’s two LFOs, a few Random targets and a Freeze button short of magnificence.

GrainSpace slices each input channel into up to 32 grains of between 16 and 500ms in length, as established by the Grain Size and Distance knobs. The Distance control widens and narrows the spacing of the grains, and by tweaking it in conjunction with Smear (which applies a series of all-pass filters to smooth the transitions between grains), all sorts of interesting tonal changes can be made to a sound without obviously ‘granulating’ it.

As well as the default Stereo mode, Mid and Side options are also on offer, the latter being particularly useful for blending peripheral weirdness in with the solid centre signal of a drum track, say.

Up to 24 semitones of upward/downward pitchshifting is on tap via the Pitch knob, while Feedback increases the feedback level of an inbuilt delay line, delivering everything from transient build-up to tail thickening, depending on the source material.

Similarly edgy, the Stretch knob dials in timestretching, speeding up and slowing down the playback of the grains using a satisfyingly grubby algorithm that we really like the sound of. Position shifts the ‘playback head’ within the buffer, delaying it at positive values and reversing playback at negative settings.

rainspace features three modulation sources for animating various parameters: an LFO and two randomisers. The LFO sports 11 waveforms (including Blip Up/Down and Random) and synced rates from 1/32 to 16 bars (oddly, it can’t be unsynced), and can be routed to one of four destinations: Grain Size, Position, Stretch and Pitch.

Each of the four targets proves brilliantly effective in its own way, making it all the more disappointing that you can only modulate one at a time.

Still, the Random Size and Pitch knobs, which increase the degree of randomisation applied to those parameters for each generated grain, are great fun, although, again, it’s a downer that they can’t serve more targets.

GrainSpace’s Freeze control loops the contents of the buffer constantly when turned to its first ‘detent’, leaving all parameters fully operational for manipulation of the frozen signal - the buffer tops out at two seconds. Beyond that first ‘on’ point, the knob travels through a series of tempo- synced note values, from 1/32 to 16 bars, toggling the freezing on and off in time with the host DAW at the selected time division - ie, if set to 1/4, it freezes for a quarter-note, unfreezes for a quarter-note, freeze for a quarter-note, etc. The on/off Freeze status is indicated by a green lamp, so it’s always clear what’s going on. The manual, unmodulated ‘On’ setting, however, needs to be a button rather than the inappropriate first knob position, since it has serious potential for live performance usage - twisting a knob to a precise position just to turn an effect on leaves it open to inaccuracy and just doesn’t feel right. It’s on the to-do list, apparently.

Finally, the onboard plate reverb algorithm sounds great but allows nothing in the way of control beyond mix level, rendering it no more than occasionally useful. The separate mix and Grain Level knobs are handy, though, and the global Random button, scrambling everything but the Reverb, Smear and level knobs, is just the ticket on an experimentally- minded plugin like this.

Something of a flawed gem, GrainSpace is one of the most intuitive granular effects we’ve seen to date.

The arbitrary limitations of the modulation scheme are frustrating, and the reverb seems bolted on (we’re told both are being addressed for an future update), but we can’t fault the core functionality, with which a huge range of sonically impressive treatments are catered to, from smashed-up drums and fractured FX to bizarre pads and subtly shifting ambiences. It’s another quality release from Audiority, at a very fair price.