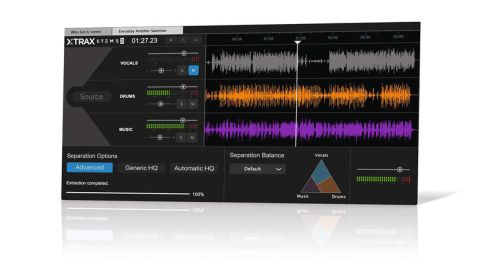 Still a solid idea and a well-designed app, but despite some improvements, it continues to disappoint for serious usage.

We weren’t hugely impressed by version 1 of Audionamix’s standalone stem extraction software when we reviewed it.

Apart from Windows compatibility, Xtrax Stems 2 doesn’t add much in the way of major new features - but it is a free update for existing users, so that’s fair enough.

In a nutshell, this cloud-based application analyses an imported source mix and splits it into ‘Vocal’, ‘Drum’ and ‘Music’ (ie, everything else) stems, which can be rebalanced or entirely isolated for extraction of acapellas, beats, etc.

The process of dividing a track into stems remains unchanged. Dragging your source file (WAV, AIF, AAC, MP3, M4A) into the interface uploads it to the cloud, where it’s automatically ‘separated’ (using the new Advanced algorithm by default, or one of the two older algorithms if specified). You have to log in at launch, but at least the software now remembers your details.

When the separation is finished, the three stems appear in the interface, each with its own Level, Pan, Solo and Mute controls for individual isolation, removal and adjustment. The new Separation Balance control enables tweaking of the stems (see Balancing act); and the separation algorithms are “fully conservative”, so with the three stems at their default settings, you’re hearing the source mix exactly in its original form. Each algorithm has to run the full separation routine the first time it’s activated, but once that’s done for all three, you can fluidly switch between them for on-the-fly comparison.

Once you’re happy with the separation, the stems can be exported as individual WAV files or a Native Instruments Stem MP4 file. Job done. Alongside Separation Balance, the other significant new feature in Xtrax Stems 2 is the aforementioned Advanced separation option, which is “based on a new, deep neural network- based algorithm”. Audionamix claim that this works 30% faster and yields much higher quality results than the original and still-in-place Automatic HQ and Generic HQ options when it comes to separating solo and ensemble vocals.

The control is a triangular X/Y-style ‘pad’, with each apex representing the Drum, Music and Vocals stems, and moving the central dot towards a stem increasingly isolates its content. Needless to say, this improvement in separation brings with it artefacts and audible ‘thinning’ of the target stem, as the process inevitably sends more and more of it to the other two stems, but Separation Balance is a very welcome addition to the software nonetheless, providing it with a much-needed degree of fairly extensive adaptability.

In our testing, we found it to be essentially as hit- and-miss as the other two, dependent upon the qualities of the source material; but when it does ‘hit’, it makes a cleaner job of isolating vocals for use as acapellas and the creation of vocal-free backing tracks from the remaining material. As for the speed boost, while Advanced is noticeably nippier than the miserably slow HQ algorithms, the process is still anything but quick, taking six minutes and 20 seconds to separate a six-minute-long MP3 over a 50mbps fibre connection.

Unchanged since v1, incidentally, Automatic HQ separates vocals only when it detects them, while Generic HQ separates the ‘lead’ melodic line constantly, be it a vocal, a synth, a trumpet or whatever. The speedier but less effective non-HQ alternatives have been dropped.

As the score shows, our opinion of Xtrax Stems hasn’t been radically changed by version 2. It all takes too long; artefacts and bleed still abound; and we struggle to find any meaningful use for it beyond vocal extraction, where it finds most of its success. Having said that, the new Advanced algorithm and Separation Balance mixer are worthy additions, taking Audionamix’s ambitious concept another step in the right direction. We look forward to version 3!