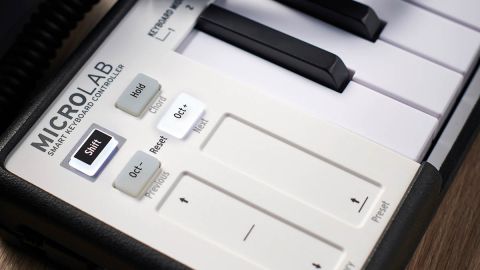 The MicroLab may not tick all the boxes for a studio controller keyboard, but as a super portable travelling device it hits the mark

MicroLab is Arturia’s latest and smallest keyboard, and it joins an established stable of controller keyboards that includes popular models such as MiniLab MkII and KeyLab MkII.

With just 25 compact keys (they’re the same size as the MiniLab by the way) and a small number of controls to the left, MicroLab is designed primarily for portability, and at 0.77kg and just over 41cm long fits comfortably in a regular backpack.

It’s USB powered and USB/MIDI class compliant, but it also has low power requirements which means it works with Android devices, iPads and iPhones (using the Camera Connection Kit) without the need for pass-through power.

• Novation Launchkey Mini Mk3
A compact and well-made controller that's great with or without Ableton Live.

In recent times, Arturia has offered black or white versions of their controllers. MicroLab expands this with three colour choices – black, blue and orange. This is achieved via a rubberised bumper which also includes a groove for wraparound storage of the colour-matched USB lead.

The USB socket is a standard B type so you can use a different lead if you want, but the included one is just the right length to wrap around the case, and the elbow-style plug-on body magnet means it tucks away neatly. We found wrapping it away did take a bit of practice, but at times I also didn’t need to unwrap all of it in the first place, so overall we like this.

MicroLab has a simple feature set, with up/down octave buttons and a latching Hold button. Out of the box, Hold provides note sustain, including sending MIDI sustain messages, both of which are handy as there’s no sustain pedal input. The same button when combined with Shift activates the Chord memory, and, when played, all notes of the chord are sent over MIDI with the velocity of the pressed key.

Pitchbend and modulation are handled via touchstrips to the left, and, combined with the Shift key, these can also be used to page through (slide) and select (tap) Categories and Presets in Arturia’s own Analog Lab software.

Further customisation can be achieved using Arturia’s MIDI Control Centre software and options include setting the pitchbend to regular or hold, and reconfiguring the Hold button to momentary (Gate) rather than latching (Toggle) as mentioned above.

We’ve tried a number of Arturia keyboards and the keybeds are excellent. MicroLab continues this tradition, and although the small key design won’t suit everyone, the action is positive, quiet and feels robust enough to handle plenty of abuse.

Meanwhile the matt finish on the pitch and mod strips provides a nice contrast to the glossy keyboard keys. MicroLab’s bundled software includes Bitwig Studio 8-Track and UVI’s Grand Piano Model D. Most impressive is probably Arturia’s own Analog Lab Lite, which includes more than 500 presets and dovetails in nicely as mentioned above.

We like this controller. Arturia has set realistic feature limits rather than try to incorporate too much. It's then maximised the design and functionality. So although this is a very affordable, basic device it still oozes quality. Having said that, there is some pretty stiff competition out there that can provide more features for roughly the same spend.

MusicRadar verdict: The MicroLab may not tick all the boxes for a studio controller keyboard, but as a super portable travelling device it hits the mark.