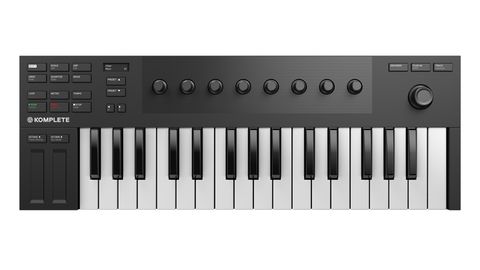 The M32 is astonishingly successful in its realisation of an on-the-go Komplete Kontrol.

As impressed as we were by Native Instruments’ A-Series keyboards for Komplete Kontrol, our one criticism of the range was that the smallest - the 25-key A25 - was too bulky to be considered truly portable, due to its full-size keys and wheels.

Well, we couldn’t really have asked for a more effective follow-up than the latest addition to the Komplete Kontrol pantheon: the M32.

Delivering almost the exact same functionality as the A-Series, this eminently mobile USB 2.0 bus-powered keyboard manages to squeeze 32 mini keys and the full complement of Komplete Kontrol... controls into its 457x167x50mm, 1.45kg frame.

The pitch and mod wheels have been replaced with a pair of short touchstrips, but the eight capacitive knobs, 4D encoder and numerous buttons are uncompromised in their size and feel, giving the full experience when it comes to browsing and manipulating plugins via the Komplete Kontrol software (included), operating Maschine, and getting hands-on with the transport and mixer of your Host Integration-compatible DAW (Logic, GarageBand and Live, currently).

The surprisingly informative OLED display from the A-Series is also in place, as is the Smart Play feature, enabling scale snapping, chord triggering and arpeggiation. And of course, it also works as a regular configurable MIDI controller keyboard with any other software.

The M32 is astonishingly successful in its realisation of an on-the-go Komplete Kontrol. Sure, those tiny keys aren’t as playable as their full-size counterparts, and aftertouch isn’t supported, but when you’re sitting in a cafe or on the beach, busting out basslines in Massive, you just won’t care - it’s ace.

Being a fair bit longer than the average mini keyboard, It does require you to have a fairly large bag or backpack for toting around, but that’s a small price to have to pay for those seven extra keys and having so much portable production power. Essential.