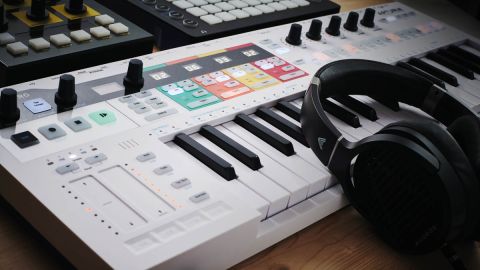 For melodic sequencing duties and flexible hardware control, this is one of the best devices on the market.

Between their ‘Step’ and ‘Lab’ devices, Arturia have come to have a pretty broad range of controllers these days, ranging from the simple, budget-friendly MicroLab MIDI keyboard to the multi-format sequencing tools of the BeatStep Pro.

Now the KeyStep Pro arrives to fill one of the few remaining gaps in that line-up; combining the cross-format analogue and digital sequencing of the BeatStep with a 37-note keyboard making it that bit better suited to melodic work.

As with the BeatStep Pro, the feature highlight here is the comprehensive range of ins-and-outs. On the MIDI front, the controller comes equipped with two outputs and one input, along with a USB port for two-way MIDI and DAW control.

These are joined by a quartet of CV voices, each with pitch, gate and velocity/modulation outputs. On the analogue side, the KeyStep Pro also features eight drum trigger outputs, along with analogue clock in, out and reset out ports. The back panel connections are rounded out by a metronome output and a sustain pedal input.

It’s a pretty comprehensive range of control options, particularly given that the KeyStep Pro is relatively compact – with a length of just under 60cm and depth around 20cm, the controller is small enough to transport easily and doesn’t hog too much desk space.

Of course, the flipside to that convenience is that there’s obviously not enough space to cram a full-sized 37-note keyboard in. While the KeyStep Pro’s mini keys feel nice enough in use, and are equipped with velocity and aftertouch sensitivity, they’re still likely to be too compact to please serious players.

In reality, the KeyStep Pro leans more toward the ‘step’ part of its name than the ‘key’ part. While the keyboard is naturally better at inputting melodies and chords than the pads of its BeatStep counterpart, this is still more of a sequencers’ device than a players’ one, which is likely by design.

I suspect Arturia know their audience here; the KeyStep Pro is unlikely to replace your stage piano any time soon, but the workflow feels tailor-made for modular and hardware synth fans.

As a device for playing a single synth/plugin it’s fine, but when used to program and play melodic patterns routed to multiple instruments or synth voices simultaneously, it really comes into its own.

Workflow-wise, the KeyStep Pro makes use of four sequencing channels, each of which can record a sequence of up to 64 steps. Each of these is polyphonic, up to 16 notes per step. Tracks 2, 3 and 4 are each equipped with an arpeggiator, while track 1 doubles up as a 24-part drum sequencer.

There’s plenty of flexibility as to how these four tracks can be routed; each can be assigned any MIDI channel, and one of more of the CV voices can be assigned to any channel, meaning its possible to use the four CV outputs to independently create four mono sequences, a single four-voice poly sequence, or any combo in between.

Along with the keyboard itself, patterns are created using a 16-button step sequencer – identical to that on the BeatStep and DrumBrutes – and five parameter rotaries. These can be used to adjust pitch, gate length, velocity, ‘time shift’ – nudging steps slightly off grid – and randomness, or probability level, for each individual step or all steps in a sequence simultaneously.

There are a variety of other creative tools included to enhance the sequencing workflow too.

As with previous Arturia sequencers, a simple ‘extend’ tool makes it quick and easy to copy 16-step patterns across 32, 48 or 64 steps. There are three choices of sequence playback pattern too – forward, fully randomised, and the semi-randomised Walk mode, whereby the KeyStep Pro introduces a chance the sequence may replay the same step or take a step backwards before moving on to the next step.

There’s also a selection of preset scales and a chord mode, whereby the controller can store a single user-defined chord to be triggered across the keyboard. Both of these features are handy for live playing, but also pair well with the sequencer and arpeggiator, particularly since they allow sequences, chord progressions and arp patterns to be transposed on the fly.

The KeyStep Pro features eight analogue drum trigger outputs along its rear, which can be controlled from track one when used in Drum mode.

While there are only eight outputs, the drum track actually features a total of 24 parts, so it’s possible to sequence larger drum setups digitally.

Workflow-wise, the drum setup is fairly similar to the standard sequencing modes, making use of the KeyStep’s sequencer buttons to program notes onto each step.

The drum sequencer also features a cool Poly mode, allowing each of its 24 tracks to have a different length, which is great fun for creating polyrhythms.

The Key to success?

The arpeggiator has a few handy features of its own, including a variety of octave range and pattern options, including a user-defined Order mode, plus a hold function. What’s more, the parameter rotaries can be used to edit arpeggios as they play, shifting gate length, timing and even introducing random notes into patterns.

• Arturia MicroLab
The MicroLab may not tick all the boxes for a studio controller keyboard, but as a super portable travelling device it hits the mark.

Some of the most fun you can have with the KeyStep Pro comes from running three or four arps or sequences simultaneously and playing around with subtle rhythmic or timing shifts.

On top of this, the controller also packs in randomisation tools, a beat repeater, and independent timing/sequence length options that make it easy to generate polyrhythms. There’s an onboard memory too, which allows each track to save and chain up to 16 sequences, all captured in up to 16 overarching projects.

It does a decent job of generic DAW, plugin and CC control too, thanks to the customisable Control mode.

This is easily one of the best do-it-all controllers out there right now. Its compact size may deter serious ‘players’ – Novation’s SL Mk3 remains the best CV-equipped device on that front – but modular and hardware-loving musicians will likely lap this one up.

MusicRadar verdict: For melodic sequencing duties and flexible hardware control, this is one of the best devices on the market.

"In many respects, the KeyStep Pro is a culmination of all the impressive traits Arturia has pulled together across its product range over the past few years. The accessible nature of this unit will appeal to many, while its capacity to build song formats through patterns and sequences – which can be tinkered with on the fly – makes it particularly well suited to controlling Eurorack systems, as well as other devices."
MusicTech

"The Keystep Pro is perfect for the studio as well as for playing live shows. All of your transport controls are on the top and bottom left for ease of controlling your DAW. You also have a screen above each sequencer so you can each parameter. If you were a fan of the original Keystep, you will likely fall in love with the Keystep Pro."
KeyboardKraze