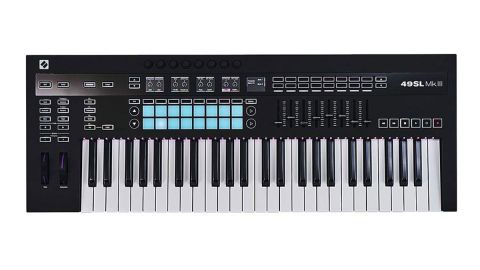 Well-designed and versatile. For those who work with both hardware and software, this may be the best studio centrepiece on the market.

Replete with knob, fader and pad controls, combined with Novation’s Automap system, the SL II range stood out as some of the most flexible MIDI controllers amongst 2009’s crowded marketplace.

A lot has changed since then though; for all its flexibility, the server-based Automap setup now looks exceptionally cumbersome compared to the plug-and-play compatibility offered by systems like NI’s NKS or Akai’s Advance range, and with the rise of Bluetooth MIDI and resurgence of CV, many musicians find that they need more from their controllers than simple USB and MIDI.

With the introduction of the SL MkIIIs, Novation is once again looking to up the flexibility stakes. While the range of controls that sit across its front panel aren’t a million miles away from those found on its predecessor, the new hardware ups the connectivity and feature set in order to go well beyond the realms of standard MIDI controllers.

Yes, you can still plug the SL MkIII into a computer and use it to adjust your DAW, but with an eight-channel onboard sequencer and multiple forms of digital and analogue output, this latest SL really can do much more besides.

The SL MkIII comes in 49 and 61 key varieties, but aside from the range of the keyboard the hardware is the same for both. In either variety, the keyboard is full sized, semi-weighted and aftertouch-equipped. It’s a classic synth-style keyboard feel, but it’s fast and comfortable to play, which is exactly what you need from an all-rounder controller like this. The velocity curve is adjustable, with a fixed option available too. The keyboard is joined by solid-feeling pitch and mod wheels placed to the left, along with a generous crop of buttons, pads, rotaries and faders, and five clear LCD screens. The hardware itself is lightweight enough to move around without difficulty, but still feels robust and well built. The top panel is matt black and combined with the backlit controls and customisable keyboard light guide the result is a design that is both stylish and easy to navigate.

Along the rear, the SL MkIII has a power switch and input for its external power adapter, which is required at all times as there’s no USB power option. Next along comes a USB port, for connection to a computer, along with three DIN ports, the first two for MIDI in and out, and a third that is switchable between offering a secondary output and MIDI through port.

On the analogue front, there’s a clock output plus two channels of CV, gate and mod out, all of which are in 3.5mm jack form. Finally, there are three pedal inputs provided for sustain, expression and foot switch. Workflow-wise, the core element of the SL MkIII is its eight-channel sequencer. This is loosely based around the pad sequencer found on Novation’s Circuit range.

As with those instruments it uses a system of chain-able 16-step patterns, which appears pretty simplistic at first glance but proves to be much deeper once you start digging into the features and capabilities. Here, each of the eight channels is known as a Part. Each Part can output note data from the sequencer as well as automation data controlled by the pads, buttons, faders and rotaries. Parts can be routed to any of the controller’s outputs, and control routings can either be setup manually or assigned a pre-made template.

Components is Novation’s browser-based librarian and customisation tool, originally developed for Circuit but now compatible with Peak and the new SL range too. In this case, the system can be used for managing and editing Templates, changing under-the-hood settings and managing Sessions, effectively replacing the old Automap system. Presets for the SL MkIII are divided into Sessions and Templates. Templates contain control routing setups for various hardware or software devices, and can either be loaded from a pre-created list or created from scratch. Sessions contain sequencer and automation data. The two combined are known as a Pack. Components gives users a neat and well-designed environment for creating, editing and storing everything contained within a Pack. The app is browser-based, which is handy for access on the go - we particularly like having the ability to edit Templates from a mobile device away from the studio, should you wish to tweak your setup in preparation of a studio session or live set. Components can be downloaded and run offline too though, so you’re not bound by an internet connection.

Straight out of the box the SL MkIII comes stocked with well-designed templates for controlling a number of common hardware devices including Elektron’s Digitakt and Analog RYTM, the Roland TR-8S, Korg Minilogue and, as you’d expect, Novation’s own Peak and Circuit synths. Novation promise more pre-mapped hardware templates in the future, but it’s an easy enough process to create your own and edit existing templates via the Components app (see boxout).

In Steps mode, each 16-step pattern is polyphonic, and can be recorded live or have notes and parameters inputted one at a time by holding the corresponding pad on the central 2x8 grid. Velocity and gate length for individual steps can be edited in the Options menu. Each Pattern can be assigned its own length, timing division and direction, making it easy to experiment with polyrhythmic ideas. While each Pattern has a maximum length of 16 steps, in Patterns view users get access to eight Pattern slots for each Part, which can easily be copied and chained to create sequences of up to 128 steps. Alongside the Steps mode, an Automation view offers more comprehensive parameter control and automation sequencing for each Part.

Beyond the sequencer, the SL MkIII also features an Arpeggiator, with adjustable rate, gate length and direction. With the Arpeggiator mode active, the arp pattern can be adjusted by using the 16-pad grid to add or remove steps. The arp can only be used on one Part at a time, but it is possible to change which part the arp is assigned to on the fly, using one of the central rotaries. The keyboard itself offers some handy features too.

The first is a Scale mode, which allows the keyboard to be assigned one of 15 scale types with adjustable root note. There’s a choice of three ways the keyboard can be set to respond to these scales: display, in which the keyboard’s light guide displays the appropriate notes, but all keyboard notes remain active; snap, where notes played outside the scale jump to the nearest note in the scale; and filter, where notes outside the selected scale are de-activated.

The keyboard can also be divided into Zones, which can each be assigned to one of the eight Parts, so users can play multiple instruments at once - handy for use as a live performance hub. Up to eight Zones can be assigned, each with adjustable keyboard range, displayed via the LED light guide above the keyboard. While these multi-faceted sequencing tools are the core feature of the SL MkIII, it can still handle the DAW control duties you’d expect from a high-end MIDI controller.

Hitting the InControl button on the front panel will switch the hardware over to control whichever DAW is currently connected. How precisely the MkIII interacts with the software depends on which DAW is being used. Ableton Live users get the best deal, with near plug-and-play setup and tight interaction with most Live elements, including parameter feedback provided by the five screens.

The MkIII is HUI ready too, so users of DAWs such as Cubase, Pro Tools and Reaper are all well served. Novation also provides comprehensive templates for Logic and Reason. Check the manual online for details of what DAW elements can be controlled.

Taken as a complete package, we’re really impressed by the SL MkIII. We’re big fans of the fun, hands-on approach to sequencing used by the Circuit range, and having that as a part of a studio centrepiece controller/sequencer like this is great. There are a few small limitations to the sequencing workflow. For one, although Patterns can be chained, the SL MkIII doesn’t offer much in the way of long form arrangement, beyond triggering Patterns manually.

We found ourselves craving variation and randomisation tools too, as a quick way to add variety to loops and patterns. Also, while there is global swing control, you can’t add swing to individual parts, and it’d be good to be able to nudge individual steps off of the sequencer grid, for slightly deeper control over the precise details of timing.

These are minor gripes though, some of which could be rolled out with firmware updates. It’s worth noting how consistently Novation has developed the original Circuit in the years since launch, which bodes well for the prospect of new features and refinements here. It won’t suit everyone’s workflow, and the trade off for flexibility is a slight lack of immediacy.

Between the well-designed templates and easy-to-use Components app, Novation has done an excellent job in making setup as hassle free as possible, but given how adaptable the SL MkIII is, you’ll still need to spend some time configuring it to best adapt it to your own setup. It doesn’t quite match the plug-and-play immediacy of NIs’ Komplete Kontrol system, but offers much more flexibility for interfacing hardware and software.

Frankly, the ability to sequence and control analogue hardware, MIDI-equipped instruments, plugins and your DAW all from one interface and clock source is excellent. During our review tests, for example, we had the sequencer triggering chords on a Korg Minilogue, polyrhythmic grooves from an Analog RYTM and TR-8, sequenced pads in FXpansion Cypher 2, all while automating each, sending an analogue clock to a CV-equipped effects setup, with the simultaneous ability to adjust levels and Devices in Live at the push of a button. That’s just one example. Dig into the SL MkIII’s versatile workflow, and you’ll find that there’s a deep well of creative possibilities.