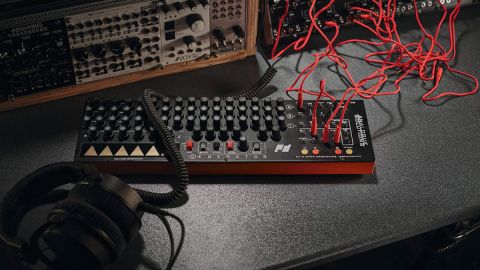 Generator goes quite a bit further than many similar units. Great for experimenting with intricate sequencing and modulation.

Despite more than 25 years of experience, Analogue Solutions seems to be on quite a roll right now.

Over the last year we’ve seen the arrival of a bunch of new Synthblocks (their desktop synth and processing boxes). This time, though, we’ll look at something a bit bigger. Generator is a wide, desktop format, 16-step analogue sequencer. The unit provides three independent control voltage output channels. However, there is quite a bit more to it than just this.

On first getting sight of Generator you’ll find a black and orange steel box that looks suspiciously like it’d fit in a Eurorack case or 19” studio rack with little tweaking. Our hunch here is that AS will be providing rack ears and a Eurorack version at some point. In regards to the latter, a glance inside the unit reveals space on the PCB for the appropriate power connector to be soldered, so watch this space.

As it is, Generator will sit flat on your desktop and is relatively compact. Power is provided by an external 12v mains adapter, but all other connectivity takes place on the top panel. This is, for the most part, via the plentiful supply of 3.5mm minijack sockets on the right. These are grouped into functional sections, with input sockets denoted by a small white dot beneath the parameter name. Here you’ll also find a lowly MIDI In socket. This is used solely for sequencer clocking purposes - more on this in a bit.  Four buttons beneath the socket section take care of sequencer transport functionality.

Play and Stop speak for themselves, while Reset returns the sequence to the first pattern. Manual Step (+1) progresses through a sequence one step at a time. This comes in handy when setting up a sequence, which allows you to audition a connected synth. Along the bottom part of the front panel you’ll find four rocker switches and six odd gold-coloured triangles, and associated knobs, which provide it with a customisable series of fixed output voltages.

Although all three sequencer channels are broadly similar, they look somewhat different in use. Channel A employs standard black knobs for adjusting the CV output for each of its 16 steps, while channels B and C use backlit knobs to display Gate trigger, step and loop position info. As the sequence progresses, channel C displays the current step position, with Start and End knobs used to adjust the sequence length and range.

Channel B’s knobs display the steps at which gate signals will be output to the two ‘normal’ gate sockets - there’s also a ‘Flipped Gate’ output that is an inverted version of these. Interestingly, Generator does not use a switch-per-step system for determining when a gate signal occurs, but rather a system of ‘Beat’ knobs (last seen on the Fusebox). Each knob is assigned to four steps in a repeating pattern of four. So, for example, the first beat knob controls steps 1, 5, 9 and 13. Turning a knob will assign a gate trigger to more of its steps, following a broadly binary incrementation scheme.

Although Generator is strictly analogue when it comes to controlling external devices, MIDI does find a place in the shape of MIDI In socket. Unlike many other sequencers, MIDI Clock is not supported. However, Analogue Solutions use a clever system for allowing Generator to keep track with your DAW, and support any type custom timing groove. The unit responds to MIDI notes received on Channel 2 only, and its universe is limited to just four notes. C(60) is used to clock the sequencer, which moves through the steps each time a note is received. So getting everything to work in sync is simply a matter of programming a repeating sequence of notes in your DAW and sending them to Generator. Adding swing is simply a case of applying swing to the DAW notes. This also makes it easy to create triplets or any other patterns.

In simple terms - turn a knob clockwise for a denser population of gates. While this isn’t as intuitive as having access to individual gate selectors for each step, it is certainly more fun and creative. Additional control comes in the shape of the metal plates mentioned earlier. These are pressure sensitive and output both a control voltage (based on finger pressure) and gate signal. In reality, they are very sensitive, so the CV output works best for the less-predictable end of the parameter noodling spectrum. They also serve a double purpose as a selector for the Voltage Generator (VG) output (with each voltage adjusted via six additional backlit knobs). A switch allows you to mix this output with that from all sequencer CV channels (or just Channel C), useful for quickly transposing sequences.

A nifty addition also comes in the form of the glamorously-named ‘End Pulse VG Clock’ switch. Employing the first four VGs, it advances to the next VG slot at the end of each pattern, thereby allowing you to automatically control transposition or other settings. Besides, the clock source selector, two other switches remain. When Freeze is engaged, any press of the pressure plates will keep looping the current sequencer step. Impulse disengages sequence and looping and turns the Generator into a one-shot device by pausing at the end of a sequence. This makes it quite useful for creating weird modulation CVs.

Note that some of the additional knob and switch controls get their own CV inputs, which expands the usefulness of the unit even further, and lets you disrupt the sequencer playback in some creative ways. As with any analogue step sequencer, it can be tricky to accurately set CV pitch with only a single knob per step. The Voltage Generator offers a semitone-quantised CV output option, so it’s a shame this couldn’t be harnessed by one or more of the main CV channels. All in all, this is one to try if you want an analogue step sequencer with something extra to offer.