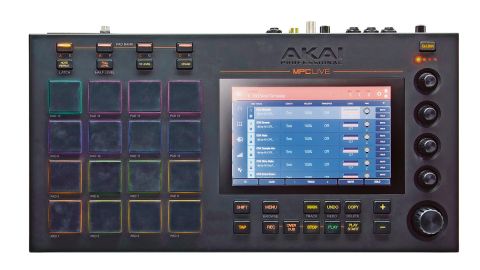 By bridging the gap between standalone operation and modern studio niceties, the Live becomes the best MPC we’ve seen in some time.

Akai released the first computer-reliant hybrid MPC in 2012 and immediately it divided opinion among users.

There are two schools of thought - the purists, who argue educing the MPC to the status of a controller strips it of its essence, and the pragmatists, who acknowledge that a standalone MIDI sequencer is a bit of an anachronism in an age of cheap laptops. Both have a point.

Now, with the launch of MPC Live, Akai appears to have found a way to bridge this dichotomy. While both still rely on the software developed for the controller MPCs - and both can function as plug-and-play controllers for the desktop version - this new line keeps things self-contained by housing their own multicore processors, allowing the software to also run inside the MPC itself. In fact, the MPC Live claims the title of the most self-sufficient MPC ever, thanks to an in-built lithium ion battery that allows between four and six hours of plug-free operation.

The main difference between Live and MPC Touch is in its size - the Live is a few centimetres longer and wider, and a good deal chunkier in depth. It’s heavier too, understandable given the inclusion of the battery and onboard processing. Despite this, it remains just the right side of the portability divide - you could happily get it into a backpack and take it as hand luggage on a flight.

Around the back Live features a decent raft of I/O. There are balanced jack and RCA inputs [see Record and Sample] along with three pairs of assignable balanced jack outputs. These are joined by two MIDI in and two MIDI out ports, along with a pair of USB 3.0 slots that can be used to load/transfer content or host class-compliant MIDI devices. An SD card slot adds an option for loading sound content, while a final USB port allows connection to a host computer.

The Live is also equipped with both Bluetooth and WiFi - the former can be used to hook up MIDI devices, and although the latter doesn’t currently have any applications, Akai has expressed an intention to roll out wireless sync and file transfer in a future update.

Under the hood, the processor packs 2GB of RAM. There’s a 16GB hard drive onboard which comes stocked with 10GB of factory content. A SATA slot allows the built-in storage to be expanded too.

The quality of the hardware is generally very high. The rubber-topped metal chassis looks smart and feels sturdy, as do the buttons and rotaries. The 7-inch touchscreen is bright and clear, and is generally responsive under the fingers.

The 16 pads remain a high-point of the MPC design - in terms of playability and feel they’re head-and-shoulders above most pad controllers on the market. The only misstep is the back panel on/off switch, which is loose and cheap-feeling; it’s a minor, albeit slightly odd, weak point in an otherwise impeccable build.

Given its size and standalone credentials, it’s impressive what the MPC Live is capable of. Sampling and sequencing remain the heart of the MPC experience and the Live is flexible in both departments - both are handled by the MIDI tracks section of the OS, which can host sampled Drum Programs, Keygroup Programs (ie, sampled instruments and kits) or output MIDI to external devices.

In terms of recording inputs, the Live features a stereo pair of 1/4" jacks and a stereo RCA input, switchable between line and phono, complete with ground peg. The latter of these is obviously aimed specifically at sampling directly from a vinyl turntable. While this might not seem like the optimum choice of input to some users - particularly given the fairly modest overall range of input options - it certainly remains faithful to the MPC’s heritage as a beat-maker beloved by the vinyl-chopping producers of early hip-hop, jungle and breakbeat. We’d argue that it’s a nice touch and - although some extra jacks or XLRs might have been more useful in many modern studios - if the inclusion of that phono connection encourages a few younger generation producers to pick up a cheap turntable and experiment with the ‘crate digging’ approach to sampling, that can only be a good thing. The one thing that would have been a nice addition is a front panel instrument input, allowing a guitar or bass to be recorded without the need for some kind of external amplification. Overall, the balance of I/O flexibility and portability feels pretty solid though.

Patterns can be recorded via the 16 velocity- and pressure-sensitive pads. Everything can also be manually inputted and edited via a piano roll/sequencer grid on the touchscreen. Using the screen for deep sequence edits can occasionally feel fiddly, but generally the combination of the touch interface, main rotary and Q Link controls make for a decent experience, on a par with what you’d expect from a modern DAW.

Sampled instruments can be loaded with sounds from the built-in memory, an external USB/SD, or recorded directly from the MPC Live’s inputs. A Sample Edit window allows sounds to be trimmed, looped, re-pitched and sliced across the 16 pads. A Program Edit window, meanwhile, allows up to four samples to be layered on each pad, and offers filter and amp envelopes for each.

Separate Looper and Step Sequencer windows offer additional ways to play and tweak sounds. There’s also a Pad Performance mode, which allows the 16 pads to be configured to set scales, chords and progressions - which is particularly handy for playing and sequencing external MIDI gear.

The major upgrade for version 2.0 of the MPC software, and consequently for the standalone MPCs too, is the addition of audio tracks. These are handled in a section distinct from MIDI or sampling. Recording is just a case of assigning an input, arming and hitting record, and it’s possible to record multiple tracks at once.

Once recorded, audio can be warped, repitched, sliced, reversed and generally edited using the touchscreen. It’s a credit to Akai’s implementation that making precise edits using the touchscreen and rotaries is a surprisingly fluid and frustration-free experience, once you’ve got your head around the general touchscreen gestures and workflow tools. There’s also a Clip Launch mode, which allows users to record and launch audio clips in a manner similar to Ableton Live.

There are some restrictions on what the Live can do in standalone mode compared to when controlling the desktop software. Firstly, users are limited to a maximum of eight audio tracks. Secondly, it’s not possible to load VSTs or third-party plugins in standalone mode.

Fortunately, the MPC does offer a healthy complement of onboard effects to make up for this. These are generally high-quality and cover a broad base of mixing and creative applications. These use largely numerical interfaces, and users may find they miss the more detailed UIs afforded by their favourite plugins.

The other thing to be said for working with the MPC is that the general workspace can feel a little bloated and complicated. Projects are recorded as Sequences, which can then be arranged in Song mode. Each Sequence has separate MIDI and Audio sections , each divided into Tracks. Tracks host Programs controlled by separate Pad Mix, Track Mix and Pad Mute windows. Samples are recorded in the Sampler, tweaked in Sample Edit then layered in Program Edit... we’re sure you get the picture; there are a lot of elements to the workspace.

This isn’t necessarily a problem - it’s not that the MPC workflow is difficult or frustrating, it’s just not neatest system. Rather than causing barriers to creativity, it merely means there’s a slightly steep learning curve for new users. Of course, this complexity is also testament to how deep Live is for a standalone device.

Minor niggles aside, the MPC Live is generally excellent. It successfully straddles the divide between the modern approach of recent controller MPCs and the standalone groovebox heritage of their ancestors.

There’s still an argument to be made that a laptop and some choice peripheries can do more, for a similar footprint and financial outlay, but undoubtedly, the self-contained nature of the latest MPC ecosystem is a positive. Of all the MPCs we’ve seen in recent years, this is the one with the most clearly defined identity, and as a result it’s the best addition to the MPC line in some time.