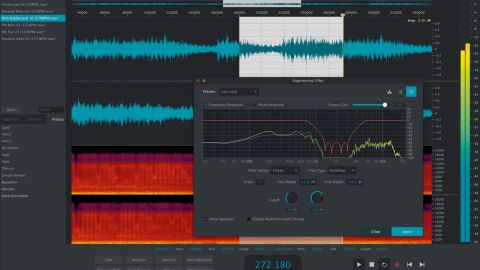 It’s handsome, smooth and easy to use, but ReSample falls flat for its woefully inadequate processing workflow and general bugginess.

With every DAW on the market capable of relatively advanced manipulation and in-place processing of samples, the role of the audio editor has changed dramatically over the last two decades.

While expensive dedicated tools such as WaveLab, Peak and Sound Forge used to be a must for every computer musician, now they’re largely the reserve of mastering, dialogue and post-production engineers. For the average music producer, a standalone audio editor might have its occasional uses, but these days it’s considered by many an unnecessary expense.

With the focused and affordable ReSample, then, 2nd Sense Audio is hoping that a combination of low price and streamlined UI/workflow will bring the audio editor back into the mainstream.

ReSample is a standalone application for making basic waveform edits and - more importantly - applying processing to single or multiple audio files using its own DSP modules and third-party plugins.

Upon first launch, the simplicity of the application in comparison to WaveLab, Sound Forge et al is immediately apparent, with its clean, uncluttered interface being completely free of toolbars and light on controls in general. The interface is divided into four resizable areas: the Transport section is at the bottom, while the left-hand side houses the File List and the three-tabbed Metadata/Browser/History panel, and the main area hosts the waveform, spectrogram and output meters.

The transport section has no shuttle/nudge buttons or key commands - you get Play, Stop, Loop, Record and jump playhead to start/end, and that’s your lot. The File List is where all your loaded and recorded clips appear, and double-clicking one opens it in the main panel. We don’t see why this couldn’t be a single click, and we’re very surprised that you can’t use the arrow keys to flip between files.

Equally bemusing is the History panel, which lets you pointlessly select each edit in the undo/redo list, but offers no actual functionality - you still have to use the usual undo/redo commands to go backwards and forwards one step at a time.

The Metadata editor is rather limited, too, only enabling text entry for Title, Artist and Album.

In the main area, the waveform zooms all the way down to the level of individual samples, the amplitudes of which can be raised and lowered by dragging their associated handles up and down.

Since you can’t adjust multiple samples at once, though, this is a fiddly workflow that really needs fully realising with a pencil tool. There are also no markers, slicing, stripping of silence, dragging of highlighted regions within a clip or to a new file (that’s done using standard Cut, Copy and Paste commands), layering, compositing or other ‘power features’ - but we appreciate that ReSample isn’t meant to go that deep.

Part of the process

Every processing function in ReSample - including sample rate/bit depth, fades, conversion, normalising, etc - is handled via its own discrete module. Even the four analysis displays (Oscilloscope, Spectrum, Phasescope and the very informative Loudness Meter) are included as Processors, which - thanks to the one-at-a-time ‘workflow’ - means you can’t actually use them to monitor the results of your parameter tweaks as you make them. The good news is that there are some real gems in the line-up, and even the workaday likes of Reverb, Chorus, Delay and Phaser are perfectly serviceable. The two compressors (regular and multiband) feature adjustable Attack and Release, while the nine-band EQ comprises five parametric bands, high and low shelves, and high- and low-pass filters, and - mercifully - includes its own spectrogram. The Engineering Filter covers four filter models, with four types each. Our favourites are the De-Esser and the Doppler, which simulates the pitchshifting of a source sound as it moves towards and away from the listening point along a multidirectional user-definable path. As a set, ReSample’s effects are rather nice, which makes the fact that you can only use one at a time even more frustrating.

Scrolling and zooming of the waveform is smooth using the mousewheel, touchpad and key commands; the spectrogram is a handy inclusion, giving insight into frequency content over time; and we love that the waveform overview appears on the Touch Bar of the new MacBook Pro, for hands-on positioning of the playhead.

Each of ReSample’s 22 signal processing modules, four analysers (see Part of the process) and all your installed VST/AU plugins are called up from the Processor menu or - in the case of eight common (and, frustratingly, unchangeable) processors - the bank of buttons to the left of the time display.

Sadly, it’s here that 2nd Sense’s app begins to unravel, as ReSample is restricted to loading and running a single effect, process or set of analysis modules at a time.

The idea, presumably, is to audition a processor, render it into the audio file once you’ve got it sounding how you like, then load up the next effect in your chain and repeat. That’s right: you have to fully apply your Stereo Enhancer before you can audition your EQ on it or even visualise the effect it’s having in the four analysers.

The Batch dialog does facilitate stacking of plugins for export processing of single or multiple files, but even there - quite ridiculously - you can still only view and audition one effect at a time! It’s a nonsensical, utterly maddening workflow that obviously puts the kibosh on any serious sound design ambitions and hobbles ReSample’s corrective workflow.

On the bright side, internal and third-party effects retain their settings when closed, so you can reload them in the same state later on; and each applied process can be undone, albeit only in reverse order of application, despite the deceptive appearance of the History list.

Also, you can of course apply processes to just a selected region within a clip, although you can only audition the whole thing. For quick and easy editing, conversion, analysis, processing and export to a variety of compressed and uncompressed formats, ReSample gets the job done.

It is, however, quite buggy, crashing frequently; and the inability to audition stacked processors and plugins is a full-on showstopper. A proper serial effects rack (amongst other things) desperately needs bringing into play before we can give this otherwise quite promising audio editor our recommendation.