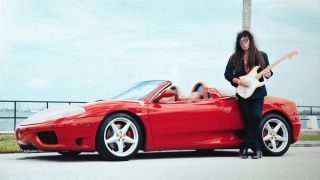 It’s very fitting that Yngwie Malmsteen has chosen to conduct today’s interviews from London’s Courthouse Hotel - sat inside what was once John Lennon’s solitary cell, though the space now serves as a private booth within a refurbished trendy bar.

The Swedish-born neoclassical shred guitar hero has a new album to promote, Blue Lightning, which features four originals alongside covers of music made famous by Deep Purple, The Rolling Stones and The Beatles.

“Mick Jagger’s just over there, too!” he laughs, pointing towards the mural on display in the adjacent ‘jail’ – where another rock legend famously resided during their brush with the law. So, anyways, about this blues album…

“In all honesty, I had to do it because so many people have been telling me to for years,” he admits, from behind a pair of black shades.

“Then not long ago, Ed [Van Zijl] from Mascot Label Group suggested I make one with them. I thought, ‘Okay!’ as I’d been on my World On Fire tour for quite a while, so I ended up going to the studio for a bit, then back on tour, then back in the studio, et cetera. It was done in a mixed-up kind of way, but it turned out great!”

Naturally, it wouldn’t really be an Yngwie Malmsteen release without his own unique spin on things. Paint It Black begins more like one of the guitarist’s neoclassical overtures, while Purple Haze gets reworked without the funkiness of the original version’s Hendrix chord, the dominant seventh sharp nine, and into pure minor...

“Well, diminished actually,” says Malmsteen, with a chortle. “I thought, ‘Why not play it a bit darker?’ and used chords from that family.

“The plan was to pick songs that I liked, not because of the player but because of the song - and I always going to do them my way. Even though I love Billy Gibbons - I think he’s fucking amazing - I wanted to put my own variations on a song like Blue Jean Blues, which I did! None of it was taken down note-for-note...”

For a guitarist so widely hailed as one of, if not the greatest of all time, it’s easy to imagine there would have been some level of self-censorship, some way of toning down that signature fury for the blues - but you’d be mistaken.

Such notions simply do not register in Malmsteen’s mind, and considering how innovative he’s continually proven himself to be over almost four decades, maybe it’s for the best…

“It didn’t feel like I had to underplay anything,” he casually admits. “I just performed at the appropriate level. There was no moment where I thought I should hold back or play slower or anything. So that’s why a lot of the bluesy songs, like the title track I wrote, involved a lot of my own sound…

“There are only two songs that are strictly blues: my song Sun’s Up Top’s Down and Blue Jean Blues [by ZZ Top]. The latter is interesting because it’s a natural minor blues - there’s no mixolydian at all.

“If you listen carefully, I put a harmony a minor third up to everything the bass does, which gives it even more of a minor feel, plus the Hammond organ holding those minor chords, too. I played all the instruments, by the way...”

Even the drums, we wonder?

“Yes, everything,” he answers. “Keyboards, drums, the whole thing. I played the Hammond on the Deep Purple covers. Jon Lord had a swing, so to play it right you have to give it that feel [hums riff and clicks fingers]. I know the notes on piano well enough - I play keyboards on stage with my feet! Though I took lessons as a kid and even did a little bit of soloing on Smoke On The Water, I would never call myself a proper pianist - that would be a stretch!”

Hammond organs aside, it would be fair to say Malmsteen found the main ingredients for his sound many moons ago - a Fender Strat going into a cranked 100-watt Marshall head via some sort of overdrive pedal - all of which now have been released under his own signature series. So, unsurprisingly, that’s all that gets heard on the latest opus. Well, if ain’t broke…

“It was all done on the Malmsteen guitar, through the Malmsteen pedal into the Malmsteen amp - that’s all it is,” he continues, grinning back at us as he realises it could be one of the most Malmsteen sentences he’ll say all day.

He gets out his phone to show MusicRadar some of his extensive home collection, as well as the five Ferraris he likes to drive around Miami Beach.

“People might assume I’d use my vintage Strats - I have some really old ones, like ’54 and ‘59 models, but my Strat is a really good weapon. The YJM Fury pickups by Seymour Duncan are great for getting those chiming Hendrix tones.

“I have a lot of Gibsons too, all sorts of Vs and Les Pauls and 335s. Really nice ones - which at one point I was actually thinking about bringing out, but for some reason the Strat has always been the one.”

As anyone that has sat down and tried to replicate Malmsteen’s thunderous leads will attest, there’s a lot more to it than a shopping list of pricey equipment, but the guitar star insists the methodology behind his tone is equally as paramount as the mesmerising dexterity and warp-speed fingerboard acrobats. Once pickups have converted acoustic noise into electric, it’s crucial to maintain a signal pure and uncontaminated.

“I find that it’s best if you start clean and end clean in your guitar chain,” he advises. “You don’t want your pickup sound to be distorted; it should sound clear. Not quiet, but clear. The first boost comes from my Fender overdrive, which is more like a DOD 250 than a Tube Screamer…

“Let’s get technical for a minute: it’s really important for an overdrive pedal to have no active electronics. Most others aren’t true bypass. They have a tone circuit… that stuff is shit! Get rid of it. Anything with gain and level, don’t bother with. If you took my pedal and went straight through the mixing board, it wouldn’t be distorted; it would just be louder. The tubes have to do all the work - it’s very important.”

Indeed, there are the valves glowing bright inside those Marshall YJM100 heads. In true Yngwie fashion, his amps are kept “on full so the tubes are going fuckin’ nuts” before being fed into his ear-bursting 300-watt cabinets. Of which, by the way, there are many…

“To get the real tone, you need a Marshall like mine that doesn’t have the master volume,” he continues - with an air of authority that must follow him into any room he walks into.

“Amps with a gain knob will lose signal at the power stage. The preamp tubes will fuzz, but power amp tubes are hardly working and you’ll miss that distortion because EL34s have to be pushed.

“My amp has a power soak built in, so if I had to turn down - which I never do - I could go from 100 watts through four tubes to 50 and two. 300-watt cabs are great because there’s no flapping and no cone distortion. Both guitar and speaker should be clean… and loud!”

Blue Lightning is out on 29 March via Mascot Records.