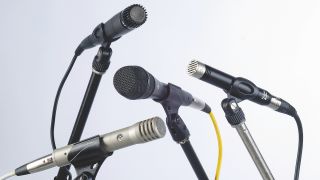 Microphones are one of the most fundamental tools for anybody recording or performing music. From the tough dynamic mic used on a stage, through to the delicate ribbon mic used to capture the natural warmth of an acoustic guitar, the type of microphone you choose has a huge impact on the sound the listener hears. Here we will offer some guidance on the different types of microphones available, how to choose a microphone for every musical scenario and provide insight into the technology behind them.

Fortunately, there are a relatively small number of types to go through. We’ll focus here on dynamic, condenser and ribbon microphones. Each has its own benefits and drawbacks, depending on the situation they’ re employed in, and making the right choice ensures your recordings sound as good as they possibly can be. Let’s take a look at the different types of microphones and explain a bit more about what you’d use each type for.

Dynamic microphones are perfectly suited to live performance. This is due to their inherent sturdiness, which makes them perfectly equipped to life on the road. Functionally, dynamic microphones are so-called not because of their dynamic range, but because of the type of electromagnetism employed within. A thin sheet, called a diaphragm, transmits vibrations caused by sound waves to a coil, which in turn transfers the vibrations to an electrical wire. This creates a signal, which is then amplified to produce – or reproduce, more accurately – the sound you hear.

Since the basic mechanical design of a dynamic microphone is so simple, they are both commonplace and extremely durable. And, unlike other mic types, dynamics do not require a power source to operate. Typically, you’ll see dynamic microphones used for live performance, where ‘audio quality’ is just one of a number of desired criteria, not the main one. That’s not to say dynamics aren’t chosen on sound quality – far from it – but they are far less delicate than other ‘better’ sounding mics and so can be relied upon to operate in more testing situations.

They also tend to react better to higher sound pressure levels, making them ideal for recording louder signals like guitar amp. Finally, most dynamic microphones feature a cardioid pattern; this relates to the area or direction from which the microphone receives its audio. Cardioid mics pick up audio from directly in front of them, and reject any sound which is off a specific predefined axis. This again adds to their suitability to live performance, due to the mics ability to pick out a singer’s vocals but not the sound coming from elsewhere on the stage.

Shure SM58
This veteran of the live scene is still going strong, and is the first choice for vocals for many bands and artists.

Shure SM57
A slightly different proposition to the SM58, the Shure SM57 is ideal for miking loud guitar cabinets in studios, where it copes with high sound pressure levels like a champ.

Sennheiser E945
A superb choice for vocalists, offering protection against feedback and a great overall sound.

For many, condenser mics mean the more common ‘large diaphragm’ style of condenser. These are more common, and indeed sought after, for many applications. Yet for detail, accuracy and purity of sound, it’s the small condenser that many producers will look to. The reason is in their construction and format. Any kind of condenser mic works on the same principle; two plates – a front plate, known as a diaphragm, and a parallel back plate. When an audio wave hits the front plate, it vibrates. This alters the distance between the two plates, altering an electrical signal.

The size of the diaphragm, however, is important for a number of reasons, the most important being the accuracy of sound reproduction. With a small diaphragm the reproduction is more consistent and accurate across the frequency spectrum, making it ideal for situations where a sound needs to be recorded as close to its natural tonality as possible.

Small diaphragm condenser microphones are usually slim, and are often called pencil mics. They receive audio usually front the end of the mic, rather than from the side, and as such have a unidirectional pickup pattern. As with any condenser mic, they require an electrical signal which can come from an internal battery or, more often, in the form of 48 volt ‘phantom power’ from an external preamp or mixing desk.

High end studios will often have a collection of large diaphragm condenser microphones, each with their own speciality voicing. Some work best as vocal mics, others for guitars. A good producer will be able to match a mic to a desired outcome based on the mic’s unique voicing. Typically, they lack the high-end sparkle of a small diaphragm mic, but this is no bad thing. Acoustic guitars, for example, when captured through a small diaphragm can easily become overpowered by minute details like fingers brushing the strings or accidental pick scratches. A large diaphragm, however, would reject these super-high frequencies and produce a far more pleasing outcome. For speech and vocals too, large diaphragm condenser mics produce a rounded, balanced sound which accentuates the source material in a desirable way.

Shure SM7B
A real workhorse of a mic, the Shure SM7B has found real success in the speech market, and makes a superb choice for podcasting and voice-over work.

AKG C414 XLII
We loved the versatility of the AKG C414 XLII, which features nine different switchable polar patterns making it ideal for recording almost anything.

Aston Spirit
British brand Aston is building a superb reputation thanks to mics like the Spirit, which delivers incredible performance for its price.

Ribbon microphones are the rare beasts of the recording world. They operate on a similar electromagnetic principle to dynamic microphones, but instead employ a strip of extremely thin foil which follows changes in sound pressure far more accurately than a moving coil capsule. This provides superb reproduction of sound, but comes with a few caveats. Due to ribbon mics featuring a single conductor, they produce a far lower output signal than regular dynamic mics, therefore requiring a high quality, low noise preamp to produce a usable signal.

Ribbon mics are bidirectional, or ‘figure 8’, in that they receive a signal from the front and rear but not the sides. They’re often used to capture sounds from electric guitar cabinets or brass instruments, where an extended or pronounced treble response isn’t required. They are also extremely fragile and often expensive, however for capturing the tone of an amplified electric guitar they are highly sought after. Just don’t take one on tour, right?

Coles 4038
Coming as a pair, the Coles 4038 set work superbly as overheads for drums, producing a tremendous response from toms and kick drums in particular.

SE Electronics VR1 Voodoo
It wouldn’t be right to typecast the ribbon mic as limited in its use, as the SE Electronics VR1 proves. We had great results across a variety of situations including vocals, drums and guitars.