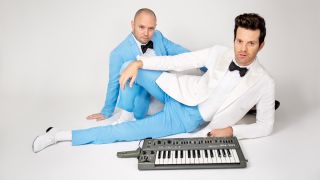 Mayer Hawthorne is an acclaimed solo artist, while Jake One has produced for the likes of Drake, Future, The Weeknd and De La Soul, but together, they’re Tuxedo, a funk-R&B power couple who recently released their third album, Tuxedo III.

The duo’s well-honed ‘gangster boogie’ sound evolved out of a shared love of Chic, Parliament and other taut funk outfits, and they’ve racked up more than 40 million Spotify streams and 16 million YouTube views.

Now it’s time for Tuxedo to pass on their shared wisdom to you. Read on for a concise collection of creative commandments...

“Always rely on your instincts and have fun. It sounds really basic and lame but it’s the realest thing. And don’t be afraid to try crazy things or mess up. So many times the best shit happens by accident.”

2. There are no rules

“Just because everyone else does something a certain way doesn’t mean you have to do it that way."

“If an idea isn’t working, leave it alone for a while and come back to it. It’s never good to hammer away at something until you hate it. When you revisit it with fresh ears, you’ll hear it differently and probably know better what to do with it.”

“Never use the basic sound of anything. Always tweak a plugin or keyboard sound so it doesn’t sound like the stuff everybody else is using. Create your own interesting sounds.”

5. Be careful what you sample