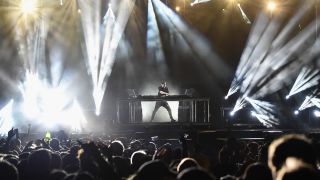 Forbes has, once again, released the details of the highest earning DJs of the year and there are some new movers in the rankings of the world’s richest superstar disc jockeys.

It’s no secret that a fair few DJs are making, what can only be described as, a sickening amount of money to mix a couple of hours worth of bangers, to a rather inebriated group of 20-somethings of an evening.

While the times have certainly moved on from the late ‘80s and early ’90s explosion of rave, in all its acidic house and techno glory, the desire to get down to some seriously four-to-the-floor action hasn’t differed greatly.

The big kicker for these mega-earning DJs is surely the ever-growing popularity gained in all forms of dance music over the past 20 years. Venues are bigger than ever before and growing in number with more and more dance festivals becoming the norm during the warmer months.

With six-figure sums being earned for a night’s work, it’s not unheard of a DJ to be playing multiple venues in one night, so it’s very easy to see how these guys are racking up the big numbers.

Forbes’ list of the world’s highest-paid DJs looks at the pretax earnings from 1 June 2017 through 1 June 2018. Now this is before such deductions as lawyers fees and the costs accrued in keeping agents and managers in the way they have become accustomed.

It’s also worth noting that these are estimated figures garnered from such consumer data groups as Nielsen, Pollstar, Bandsintown and Songkick. Not to mention the little tidbits gleaned from interviews with industry experts and many of the stars themselves.

In at 10 and down one place from 2017 is Martin Garrix who, at the tender age of just 17, first exploded onto the scene with the infectious 'Animals', which peaked at number one in the Beatport charts.

Today, the dutchman’s empire reaches beyond the world of DJing, with Martin becoming the face of Armani Exchange’s autumn winter 2017/2018 campaign.

A new entry in this year’s top 10, but no stranger to this list in recent years, Ryan Gary Raddon has been on the circuit for 23 years, but it wasn’t until 2003 and his first full-length release as Kaskade that gained him worldwide notoriety.

Since then, the US-born DJ has worked with deadmau5 on 2008’s 'Strobelight Seduction', which also saw his first UK chart entry with the single 'I Remember'.

The longest-serving DJ on this year’s list, David Guetta, has been DJing for longer than some of the guys on this list have been alive. He takes the 8th spot in 2018, a step down of one place and the difference of $10 million.

After a recent string of collaborations Guetta has announced the imminent release of seventh studio album, which should be dropping just after the summer.

With the album done and dusted, no doubt the French DJ will embark on a relentless touring schedule over the next year and climb back up the money tree.

Thomas Wesley Pentz aka Diplo, also drops one place this year and a whole eight-and-a-half rocks, or $8.5 million to you and me.

Diplo, like most of the other DJs on this list, isn’t just your average, jobbing DJ. These guys have fingers in multiple pies and one particular high-profile pie with a Diplo-shaped finger in it is the ‘Sound of Rum’ creative partnership with rum giants Bacardi.

Of course it’s not all about the shill, as Diplo’s musical mastery extends beyond the booth with countless remixing and producer credits for some of the biggest names in pop. Along with hugely popular Major Lazer project, Pentz has also teamed up with Skrillex to form Jack Ü, which won best dance/electronic album at 2016’s Grammy awards.

Up four from 10th last year and our highest climber is Anton Zaslavski, the German-born Russian producer and DJ who goes by the moniker Zedd.

In 12 months Zedd has managed to improve on last year’s total by a further $7 million, no doubt having something to do with the ongoing success of his second studio album 'True Colours' and constant touring schedule. Impressive considering he is already gearing up for the release of the third studio album which may include the single with Liam Payne ‘Get Low’.

Our only masked-crusader to make the list is Marshmello, or Christopher Comstock as his mother would prefer him to be known. He joins Zedd in bucking the downward trend by rising two places to fifth, with an increase of $2 million.

Much of Marshmello’s work outside of DJing has extended to his series on YouTube called Cooking with Marshmello, where the bucket-headed one actually cooks up a storm in kitchen, along with the help of some friends, including Paula Abdul.

The Dim Mak label founder also jumps up a spot, but his total wealth seems to have dropped by nearly $2 million, still, we’re sure he’s not too sad about about totalling a cool $28 million this year.

Steve has been rather busy over the past 12 months with the release of his fifth studio album 'Steve Aoki Presents Kolony' last summer and the '5OKI' EP dropping in February this year.

The second oldest DJ to make the top 10 (that particular accolade goes to Guetta) is Tijs Michiel Verwest, or Tiësto as he’s most commonly known.

Dropping one place and $6 million from 2017, the Dutch master is often regarded as one of the greatest DJs of all time and regarded as the as the grandfather of EDM.

Despite already releasing five studio albums, his debut EP ‘I like it loud’ came out only earlier this year, with collaborations with the likes of MOTi and Matisse & Sadko.

Swapping with the great Tiësto in this year’s poll are The Chainsmokers, who have amassed a satisfying $45.5 million, just a shame that they have to split it two ways.

The NYC duo have been only active for around six years under after reforming in 2012 and it didn’t take Alex Pall and Andrew Taggart long to become a household name in numerous countries around the world.

They’re debut single #Selfie was well received, hitting the top 20 in most countries, but perhaps 2016’s Closer really put them on the map as one of the globe’s hottest acts, taking the number one spot in the US and most of Europe.

No change at the top for Scotland’s bonny prince of the booth, who has scooped a whopping $46 million this year.

There’s already talk of a sixth studio album in the works, which could materialise early next year, so we’d put our money on Mr Harris appearing, once again, at the top of this list in 12 months time.

So there you have it; proof, if proof were needed that DJing pays and rather handsomely too. Naturally, your thoughts will now turn to “how can I get a piece of this DJ-millionaire pie”? Well, there’s plenty of graft to the craft and you could do no wrong with starting with our guide on How to DJ on a laptop: a beginner’s guide to the software, gear and techniques you need.