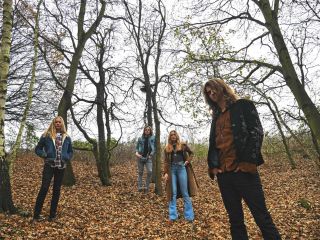 They call Stockholm home, but The Riven formed in London when drummer Olof Axegärd met Arnua Diaz at university.

“We were playing jazz and the guitarist said I was playing jazz quite loud, so that’s how I was invited to join the band,” says Axegärd.

We had a quick catchup with the Swedes' resident sticksman to find out more about their blend of stoner rock, psychedelia, heavy blues and classic metal.

“For me, it started with Nicko McBrain when I was little. The way he approaches drums, he never plays straight, it’s always swung. He did a lot of single bass drum stuff that I thought was intriguing.

“Tony Williams is a great one, because he plays jazz very loud and when he moved from jazz into fusion that was even cooler.”

How do you approach creating your grooves?

“I love accenting vocal parts. The ground is set with me and Max [Ternebring, bassist]. Sometimes we rehearse, just him and I, and we figure out where the pocket is.

“Arnau on the guitar is the man who keeps the melody and the harmony moving forward whilst we are the ones who make people dance. I see it as we lay the bricks for the road and everyone drives upon that.”

How did you come to work with producer Ola Ersfjord?

“In this case, we wanted to go for more low-end. We actually took off the resonant heads from all the toms. It made it sound more retro and it really suited the music. I’d never played drums without a resonant skin, the dynamic is harder to get but it was really interesting to do.

“We practised a lot with a click before going in the studio, but we recorded without the click to get more of a live feeling and a sense of humans playing in the moment. The tricky bit is finding a really good feel for the songs, because when you’re recording, it’s always a bit tense. You overthink a lot.

“In the beginning Ola thought I was doing too much. ‘You should bring it back a bit here.’ I was quite happy, me and Max finished in two days and I started to brag, like, ‘Finished in two days! Now I have a week of vacation here in Madrid.’

“Ola turned around and said, ‘You know that I produced you the most, right?’ That brought me back down to earth.”

What’s your must-have piece of kit?

“One of the tools of the trade I always have is Octobans. I love the sound of Octobans.

“They give you such a punch, I can’t go anywhere without them. I guess it comes from watching Simon Phillips a lot.”

What have been the highlights of playing with The Riven?

“I would say the camaraderie. We’re a little family and it’s always amazing to play and to do what we do.

“We’re firing on all cylinders and I’m grateful to have met these people because we connect on a higher level than just writing and playing.”