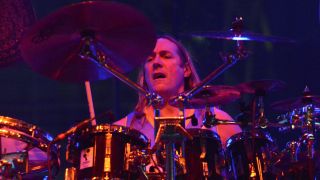 Let’s face it, there was no bigger story in prog circles this year than the release of Tool’s long, long-awaited new record but Danny Carey faced some stiff opposition from perennial fan favourite Mike Portnoy in the battle for the top spot.

Progressive rock and metal are not genres for the faint of heart, requiring fluency in odd-time signatures, serious chops, and polyrhythmic independence, so, while there can only be one winner, please raise a glass to these bold souls who push tirelessly at the boundaries of their craft and the limits of what can be accomplished with four limbs.

Was Fear Inoculum worth the thirteen year wait for Tool fans? We shan’t dignify that with an answer.

Tool’s fifth album proves that Danny Carey remains one of rock’s most articulate players, crafting sinuous, writhing rhythms in odd time signatures that would leave lesser drummers tripping over their own sticks.

DON'T MISS: Danny Carey: “It’s a sad thing when almost every band you see is keeping time to clicks and backing tracks”

The inexhaustible Mike Portnoy maintains a work rate worthy of three ordinary drummers. 2019 brought the brilliant third album from Flying Colors, a world tour and live DVD from Sons Of Apollo, and a new release with The Neal Morse Band, all showcasing his potent blend of power and technique.

2019 was another admirably prolific year for Marco Minnemann, with a new solo record, more genre-mashing, chops-busting mischief from The Aristocrats, and the release of Lovers Calling, his collaboration with Rush guitarist Alex Lifeson. Plus he’s gigged with Steve Hackett, The Sea Within and In Continuum. When does he sleep?

After the sprawl of The Astonishing, Mike Mangini came back tighter and punchier with Distance Over Time. The ambidextrous Mangini has changed his kit again, putting his cymbals way up high to avoid mic spill, but he’s flying around the drums with a speed and power to rival Bruce Lee.

A star on the rise ever since he landed the high-profile gig with Steven Wilson, Blundell has further cemented his reputation in 2019 by joining Steve Hackett’s Genesis Revisited tour. When not playing those classic Phil Collins’ parts onstage, Blundell recorded the excellent Under Stars with John Mitchell’s Lonely Robot.

The Antipodean technical marvel continued to push the boundaries of coordination and concentration in 2019 with Ruination, his new solo album packed full of mind-expanding drumming. And he’s been touring as a clinician, with Aussie rockers Southern Sons, and with Icefish, playing the daunting material from their Human Hardware album.