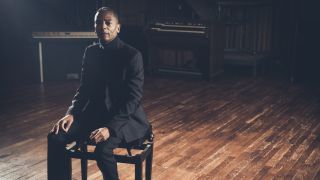 You can't hide from the fact that techno feels huge right now. Just check out the sheer number of plays some of the artists on this list are reaping on YouTube and there have been some stellar performances around this year's biggest festivals.

You also get the feeling that the genre has been shaking off its utilitarian image with a more diverse sonic palette coming to the fore. Not to mention some cracking releases from everyone on this list and beyond, with a particular highlight being Barker's Utility EP. Its boldness has not only been a big talking point, but it does as much to shift expectations on the genre.

We could go on, but instead, we'll just show you the top ten techno producers and DJs of the year, as voted for by you...

2019 saw the return of Jeff Mills with a new album, Moon - The Area of Influence, on his Axis label. The founder member of early '80s Detroit collective, Underground Resistance, has clocked up an eye-watering 38 studio albums to date, not to mention the large number of EPs, singles and remixes.

'Busy' doesn't quite cover how prolific Kraviz has been over the past 12-months. The Russian singer, producer and former dentist debuted a new audiovisual show at Coachella with other artists from her Trip label, as well releasing an EP and remixing for the likes of Chistine and the Queens, Charlie XCX and St Vincent.

The Drumcode boss has been busy this year with a whole bunch of high-profile shows and festivals including Drumcode Festival, which was back fro its third year. His label also saw its 200th release with Amelie Lens dropping a remix of Beyer's 2014 track, Teach Me.

Belgian DJ and producer, de Witte, joined a long line of DJs in releasing her own label this year. KNTXT was  launched with a collaboration with Chris Liebing called Liquid Slow. Charlotte followed followed up with two more EPs released on her label, on the same day.

2019 saw ths release of Paula Temple's debut long-player, Edge Of Everything, which dropped on her own Noise Manifesto imprint. The album has been described as a political record with Temple describing it as "a call to action in desperate times." Combine that with a truck-load of shows and an appeanrence on the new remix album based on Fever Ray's Plunge and you have quite the packed calendar year.

This year, Jamie Roberts reignited his collaboration project, Karenn, with Arthur Cayzer aka Pariah to release their first EP in five years entitled Kind Of Green on the new Voam label. The pair then quickly followed up with the Voam Archive 001 EP, which was all just setting us up for a debut LP Grapefruit Regret, which landed just last month.

A remix of Tinfoil's Friendly Safe Fumes here and the EP, Murder in Birmingham there (her second on Soma records), plus another remix of Emika's Falling In Love with Sadness and you areleady have enough to be going on with. Pile on top of that a slew of gigs and festivals and you have Rebekah's 2019 in a nutshell - busy.

Having previously released music with Andreas Baumecker under the Barker and Baumecker moniker, Sam took a bold step in 2019 to release his second and third solo EPs, Utility and Barker 001 respectively, on Ostgut Ton without any kick drums present. Despite missing one of the key elements of the genre, both releases retain a groove that can still carry an anthemic highlight in any techno set.

Avalon's touring schedule, this year, has been beyond relentless and it does look as though she's not had a holiday since January. How's she's managed to fit in anything else is beyond us, but she has. One of the highlights has to be her Scrub Jay remix of Four Tet's Teenage Bridsong.

And if you thought Emerson's schedule was rammed, then Deborah De Luca's calendar will also put your head int a spin. Another rising star in the world of techno, De Luca somehow also finds the time to run her own label, Sola_mente Records founded in 2013.