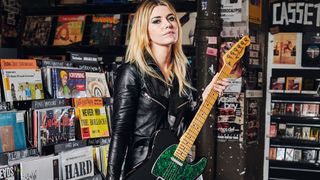 Best of 2019: This is the category where we find the widest selection of tones and approaches, players who become harder to categorise and are all the better for it.

You've voted for a a fantastic selection here. Here are players that prove the guitar is innovative, creative hands. Inspiring tomorrow's generations to do the same.

The winner by some margin, a strangely underrated player finally gets some due. The role of the guitarist in a two-piece makes all the stakes higher – there's nowhere to hide, and the gravitas of your parts and tones becomes all the greater.

As the band's sonic ambitions have grown, so has the line line-up. But Laura-Mary simply continues to ace her role. Unafraid to throw leftfield curveballs into walls of fuzz and atmospherics.

2. Lee Malia (Bring Me The Horizon)

“We realised that songs don’t have to have 100 parts, with every single sound you could make”

Hang on, aren't BMTH a metal band? Well no, not really. They certainly keep a toothbrush in that world but transitioned away from that some albums ago so we're quite happy to have Mr Malia here, thank you very much. As are you by the looks of his placing here.

Humble and quietly getting on with staying ahead of the game, Lee is our kind of guitar player. His signature model says a lot about his open mind as a player; capable of covering a wide gamut of tones. But he can still riff with the best of them too.

Watch Mike Sullivan live and it becomes clear what a fine art looping is, nevermind the intricate parts he's actually having to play. But the end result is justified – he's a player that deals in grand designs.

Russian Circles prove what composition as a three-piece can achieve, Mike's sensitivity to bassist Brian Cook and Dave Turncrantz's inventive playing is as important as his own.

After two album of electric heaviness, Wolfe's decision to head back to acoustic tones felt bold but makes perfect sense on Birth Of Violence. Rather than simply retreading her folkier roots, she's combined the hypnotic band sound with the intimacy of flattop playing to intoxicating effect.

That she was open to going back for guitar lessons head of the record speaks volume about her dedication to her craft.

It's been a relatively quiet year for this trio, just the two albums released in 2019 following 2017's five. Their latest, Infest the Rats' Nest, finds the Australian band exploring thrash metal and Motorhead-esque rhythm and sounding better than most bands that play it full time.

Contrast that with the playfully upbeat boogie of preceding album Fishing For Fishies and you get a taste of the wonderfully experimental world these guys live in. And long may they thrive in it.

Another band enjoying a creatively prolific 2019, Foals delivered a two-parter with Everything Not Saved Will Be Lost.

The two halves served as an expansive stage for their ambitions; the first allowing them to really explore atmospheres before Part 2's more intense sense of urgency.

It's hard to resist her sound; reverb swelling into crescendo, bedded in hypnotic melodies. We can't wait to hear her next record.

“When we were 17, we wanted to fit as many notes as possible in. We’re minimalists nowadays”

Thrice's comeback after their hiatus has been quite remarkable - they haven't missed a beat. Indeed, they're a stronger live proposition now than ever. Kensrue and Teranashi's ever-evolving dynamic is a huge part of that.

The Deeper Wells EP proved again how their nuanced work moves from minimalism to furious and all points in between.

Andy Bell talks returning to Ride and his Rickenbacker'd rig

Another band who have been able to pick up again in glorious fashion, Ride have gone further – building a bridge between their classic shoegaze era and the new.

This Is Not A Safe Place was the culmination; dreamy pop (Future Love) and pounding nineties fuzz fest (Kill Switch) on one of the very best records they've ever made.

For some, The National are simply the best band in the world right now. Masters of the 'grower' album, we prefer to view the Dessner twins as ambassadors for the understated and avoiders of the obvious.