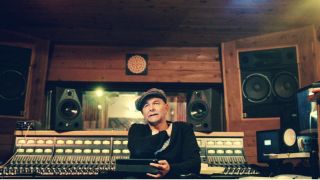 As we write, The Gaslight Anthem are touring the UK in support of the 10th anniversary of The ’59 Sound, an album that would become their commercial and critical breakthrough.

The man behind the desk for that record was Ted Hutt. We caught up with the guitar band specialist to talk about The ’59 Sound, the producer mindset and capturing personality on tape.

“It was a very special moment in time for the band, and for me,” says Hutt. “It may have been the first time for me of getting that feeling of going in the studio and knowing that everything was exactly where it should be. It’s hard to explain it, but it felt like an alignment. It just had this feeling that we were riding something that we were supposed to be riding.”

That feeling proved to be right. The album would bring them to attention of audiences worldwide, not to mention one Bruce Springsteen. But success, as ever, was a double-edged sword. In worrying that the 59 Sound would define the band, it has by default defined them, because so many of the decisions made since seem to be a reaction to that album.

10 years on and songwriter Brian Fallon finally seems to have been liberated from this burden, working with Hutt  again on his solo record Sleepwalkers and embracing the album’s anniversary for a series of live shows. Fallon told The Independent recently that he called Hutt before Sleepwalkers essentially to ask who he was when he walked into your studio to make The ’59 Sound. What did Hutt tell him?

“That conversation was about letting go of those things that you feel are other people’s expectations of you,” says the producer.

“It’s easy to get consumed by the idea of what we think we should be or what we think we should be doing. I think those conversations were just saying, ‘Brian, remove all the fluff and just get back to the thing that inspires you. When you went into make The ’59 Sound, it was just: let’s make something that we all love and if it flies, it flies, if it doesn’t, it doesn’t.’”

It is the sort of succinct advise that you need from a trusted collaborator, and that record has become both a high-water mark and a template for the producer's approach to recording.

“There’s a lot to cover on that album,” reflects Hutt. “But I think if you had to sum it up as one thing, I think it would be the honesty and the capturing of a moment in time. It was a sort of perfect alignment.”

What follows are Ted’s thoughts on producing bands, garnered from a career spent sweating under the red light.

“To have the great privilege to be able to do what I do, I feel there is something precious about it, and it’s important to maintain as much honesty in the music that you make as you can.

“I don’t want to sound pompous or lofty, but I often go back to the things that drew me into listening to music in the first place and I have to constantly remind myself that throughout a record collection there were so many elements and aspects of those that were important parts of growing up or soundtracks to your life, but they weren’t always huge hits. They were huge to me and, and I think, to other people, too, but it’s counterbalancing that idea of success being bound in high numbers and high returns in terms of selling records or attention.

“It’s more about making it a success because you’ve accomplished something you set out to accomplish and you’ve done it with integrity and honesty.”

2. Disagreement is part of the process

“Early on, my band was produced by Mickie Most. I was watching his process and sort of feeling, if I’m honest, a bit conflicted about it. I was very, very young when I did that and it was slightly scary. It was this feeling that ‘this is the way you should be doing things’ and me wrestling with the idea that ‘I don’t know if I like that… Is it okay for me to push back? Is my opinion valid?’

“At that point, I was a guitar player in a band and it was an early stage in evolving my own personality and feeling that I needed to check whether that was okay, or if I should just follow the path because this was somebody who’d been successful and knows what they’re doing.

“Maybe the end result there is learning to work with somebody: how to collaborate. I think it was the seed, the beginning of me figuring out how to push back on that. Whether you go, ‘I don’t like that!’ and go or do you find the things that you like about the situation and try to work that collaboration.”

3. Know the next step

“You can never be in a situation where you’re going, ‘I don’t know what’s going on here!’ You can never allow the room to feel that way, even if you do. That’s perfectly natural in the creative process to go, ‘I’m not sure right now!’ But it’s doing it in a way that maintains people’s confidence that you know what you’re doing.

“I remember one of the first times that I’d been given the full rein on a production. I remember the moment clearly. I was standing in the studio and they’d spent the time getting everything setup. The first take finished and everybody looked to me. I remember at that moment just going, ‘Oh my God…’ I was blank!

“I just didn’t expect it and it was the first time I’d felt the full weight of the room right on me to make the next call. I just remember thinking, you better come up with something quick, because you cannot go ‘I don’t know.’ So I just went, ‘Let’s do one more…’ Then, as we did the next take, from that moment on hopefully to this day, I’ve always had the next step in mind!”

4. Arm yourself with the records you love

“On every record I work on, I say, ‘Let’s bring our favourite records in. Show me what you like. Show me where you came from. Show me what you’re listening to now that’s exciting you.’ I get a very good picture like that. It tells me a lot about somebody.

“Also, it’s nice to arm yourself with a bunch of things that you love, because if you ever get to a point when you’re working that an idea is becoming thin, you can go, ‘I love the way that they did this in 1957… Let’s try something like that for a minute.’ Inevitably, it never comes out sounding the same but it shoots you on a path.

“I was always struck by the idea that when John Lennon was singing back in Germany, he was trying to be Elvis Presley, but it was nothing like Elvis Presley. That’s very exciting to me that you can be inspired by something so much that it drives you to this point, but nobody outside of yourself can see that that is where it’s coming from.”

5. Build it from the source

“I think one of the rules that I’ve followed with tone is to build it from the source. If you’re looking to record more or put something down sound-wise, make sure that the guitar and amp combo is really the right one.

“Try to fix a band sound from its source. Make sure that it’s working from there, and that makes everything from that point a lot easier, whatever you use to mic it. I tend to use ribbon Royers and I’ve been playing with backing them off and leaving more room in the sound and make everything a little bigger. It’s not quite as in-your-face, but if you’re not trying to take your head off then it tends to allow a bigger sound and a lot more personality in your sound.”

6. Listen to your heart not your head

“I think looking for your own personality [in your tone] is important. Finding something that is uniquely you, as much as you can - your own signature. Using combinations of things or doing things that are not done to imitate.

“You can be inspired, but make sure it’s the sound of your own voice. There’s something in that sort of hippy vibe of letting your ‘inner voice’ speak. If you listen to it and you let it come through, there’s something in you that will say ‘that’s really good’ and it’s not really necessarily in your head - it comes from somewhere else - and you need to get in tune with that.”

“The most common mistake I see is not moving on. Not accepting that you have an idea that is not working. Watching someone pounding their head against the wall is frustrating. No matter how elaborate the setup was and how much you’ve put into this idea, if you can be honest enough with yourself to go, ‘that’s not really working’, then instead of spending a lot of time trying to push that square peg through a round hole, you can move on.

“It’s something that is applicable outside of the studio, too. Watching people in situations that aren’t really working well, constantly trying to push that thing along that’s not really working, rather than trying to change direction. I’ve had to go and sit with somebody in the past, because certain people are like, ‘Wow, I’ve put all this time into this and I’ve wasted the whole day.’ And it’s like, ‘Well do you want to waste another one!?’”

The Gaslight Anthem's Ted Hutt-produced '59 Sound Sessions is out now.