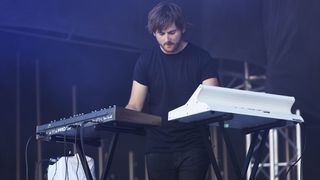 For the rest of the band, it's pretty simple. Guitarists can stand up or perch on a stool for the acoustic bits, bass players are on their feet, and drummers always on thrones. Keyboard players, though, have to make a difficult choice.

Do you stand up - possibly with one or more keyboards set up at right angles - and hope that you don't look like you're performing on an '80s edition of Top Of The Pops, or should you sit down and risk fading into the background?

Maybe it depends on the type of band you're in (stand up for synth-pop and rock; sit down for soul and jazz?) or perhaps even on the type of instrument that you're playing (on your feet for synths; parked on a stool for pianos and organs?)

We're not sure what the rules are, so we asked you, the informed MusicRadar users, to tell us. Here's what you had to say...

Your answers: should keyboard players perform standing up or sitting down?

"When keyboard players used the badass B3s everyone sat. Then came the VOXs and Farfisas in the 1960s and everyone stood up. Musicians should do whatever makes them comfortable to play well - no rules or "laws" needed."

"I like to stand. I'm in a two-man band playing synthesizer while my friend plays the guitar. I have as much right to dance around behind my synth as he has with his guitar! Plus, one of two guys sitting down might work for singer/songwriter duos but not for the electro rock we produce."

"It should suit the style of music: a jazz keyboardist would not look very convincing if he was standing; however, I would hate it if a drum 'n' bass live act was performed by a sitting synth player."

"Always standing while at a synth, always sitting while at a piano. Organ: depends on the situation. I especially hate watching rock synthesists sit while playing."

"I only ever played sitting down once and that was because I had a hangover that was so severe, I very nearly had to not do the gig. My fellow band members were not very sympathetic..."

"A prog synth God stands up. You also stand if your tune has significant energy. Sitting down is for jazz or easy listening."

"Depends on the style of music/instrument for me. If I'm playing a monosynth, especially one with no velocity like the MicroBrute, I'll stand because there isn't a lot of nuance at risk from not hitting a key perfectly and hovering over the board gives me easy knob access. If I'm playing a piano piece, anything softer, or without a lot of parameter adjustments I'll sit. It just feels more appropriate for me."

"Obviously depends on the setting. I like doing something in between, though - sort of semi-sitting on a piano stool but rarely really touching the seat during upbeat sections. Gives me the option to sit down during more quiet parts."

"Stand for the first four pints then sit down."

"Get a keytar and rock it out standing up!"

"They should only perform on walking keyboards like in the film Big. Tom Hanks can do it..."

"If you really PLAY you sit, that's pretty much it."

"Standing up. And wearing a silver cape."

"I stand mainly due to the fact that I don't want have to bring another thing from the car. No one cares so I don't. But if it's a jazz/classical gig I'm sitting."

"Wow, what a stupid question. Whatever they feel like of course."