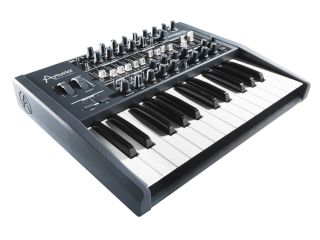 Even plug-in lovers might be tempted by Arturia's affordable Minibrute analogue synth.

We've long been of the opinion that it's possible to produce high-quality music using just a computer and some software. Ideally, you'd also pick up an audio interface, some decent studio monitors (or at least a good set of headphones), a MIDI keyboard and perhaps a microphone for making recordings.

However, we can't claim to be immune to the charms of hardware products, either. We're talking synths, rack-mounted effects, drum machines and other boxes of delights - you know, the gear that music used to be made with. What's more, we bet that, from time to time, even seasoned software-centric musos, have cast amorous glances in the direction of some of these products.

The viability of combining software and hardware is certainly increasing, with multi- I/O audio interfaces now quite affordable and most DAWs making it easy to integrate hardware processing or instruments into your mixes.

The question, though, is whether hardware still has a place in the computer-based music-making setup? Can it improve your creative experience, or is 'real' gear simply no longer necessary?

Arguably the biggest reason that people are drawn to hardware is so that they can have some 'proper analogue' in their setup. We're not going to delve too deeply into the analogue vs digital debate here, but bear in mind that a great many plug-ins are dedicated to reproducing the sound of specific pieces of analogue equipment, so there's obviously something sonically desirable about such gear.

And indeed, what could be more authentic than the real thing? The software might sound just the same - it could even be better - but with the hardware you'd never have any nagging doubts as to the authenticity of its sounds.

Whether there really is a perceivable difference is another matter, and producer/ engineer Steve Evans has some interesting thoughts on the subject.

"Many plug-ins are dedicated to reproducing the sound of specific pieces of analogue equipment, so there's obviously something sonically desirable about such gear."

"I think that the gap [between analogue and digital] has well and truly closed now," he says. "The benefits of analogue summing and non-linear analogue behaviour have been so carefully scrutinised now that the best digital emulations are truly admirable.

"Now that algorithms can be created for almost any individual unit, chain of units or acoustic environment, pretty much anything can be recreated with enough DSP, time and, crucially, knowledge about the original processes required to get that amazing analogue sound in the first place."

Analogue isn't just about the sound, though - it encourages a different way of working too.

"Working analogue has a direct effect on the process of work," confirms Steve, "and it forces you to commit sooner rather than leaving everything 'liquid' until the very last minute!"

Another reason that many people are attracted to hardware is its desirability. Even the staunchest computer muso would have to admit that buying a synth you can put your hands on is more exciting than downloading a file and tapping in a serial code. With a real instrument, it's certainly easier to see where your money's gone - and there's nothing quite like having real knobs, faders and buttons to turn, push and press.

But we have to think practically here. What can't be denied is that, in terms of the results you can achieve, soft synths represent better value for money. You'll typically pay hundreds of pounds less for instruments that can sound just as good, and if you add a decent MIDI control surface into the mix, you'll get some of that tactility back, too.

However, you could make a case for saying that, over a longer period of time, hardware is a better investment than a software equivalent. Physical units are immune to unexpectedly becoming incompatible with new parts of your system, and their performance will never be affected by the scale of the project you're working on.

What's more, if you decide that you want to get rid of it five years down the line, you should be able to get a decent amount of money back on the second-hand market. Then again, if it breaks then the cost of repair may be substantial.

Another argument is that, because hardware often represents a more serious investment, you'll feel more inclined to learn the instrument inside out. And as we all know, a thorough knowledge of your tools is a potent weapon when making music. It's all too easy to get by with a basic understanding of a plug-in, but that means you'll never really maximise its potential. In general, there's something about hardware that makes you want to truly tame it.

You can put another tick in the 'real gear' box when you're considering its suitability for live work. This isn't an issue if your music-making never extends beyond the studio, but most would agree that a hardware synth is a more reliable option on stage than a laptop and a MIDI controller. Your instrument will be ready to go within seconds of power-on, and it should stay solid as a rock throughout the gig.

This immediacy can also be a benefit at home. If you're a synth enthusiast, the time you know it's going to take to fire up your computer and music software can be enough to deter you from sitting down and playing for a few minutes. If you can start jamming whenever you feel the urge, however, that crucial moment of inspiration won't be spent listening to the sound of a operating system loading up.

There are still valid reasons to consider hardware, then, but before we all invest in a rack's worth of the stuff, let's just pause to reflect on some of the reasons why we all came to love our computers and software in the first place.

Cost is the biggest factor - you can create a fully fledged software studio for a fraction of what'd you'd pay for one that relies heavily on hardware. Then there's the issue of convenience. While it's true that most modern DAWs have features that make physical gear appear as though it were a plug-in to be inserted on any channel, what you can't do is open multiple instances: if you have one hardware compressor, you can only use it on one channel at a time. The only way around that is to render the compressed results to audio for each track you want to use it, on, which could quickly become a tiresome hassle. If you keep things in the box, your projects can also be recalled just as you left them.

A further downside is that a studio that relies on multiple bits of hardware can't be kept within the confines of a laptop case, so it isn't the best option if portability is important to you.

As you might have gathered, this debate could go on and on, but we'll conclude by saying that, while it would be unfair to classify hardware as irrelevant, you could no longer call it a must-have for music-making, either.

"A mix of both worlds is good, but certainly not essential," says Steve Evans - and that about sums it up.

This article originally appeared in issue 175 of Computer Music magazine.