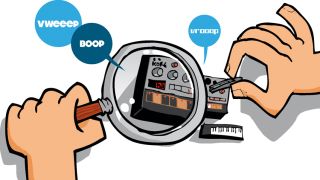 It's time to take a closer look at the mini synth phenomenon.

Once upon a time, computer musicians liked their gear to be on the large side, but these days, we're just as likely to be drawn to the smaller things in life.

Macs and PCs now come in all kinds of diminutive shapes; we talk about touch more than girth when discussing our displays; and the controllers that seem to be flying off the shelves are the ones that you can chuck in a backpack.

The synthesizer hasn't escaped this downsizing process, either. Whether on a phone/tablet or in a dedicated hardware box, it's suddenly become pocket-sized.

Korg has been stealing trade shows since 2010 with portable analogue synths, grabbing headlines once again recently as it announced its Volca range of pint-sized instruments.

Simultaneously, the market for iOS synths has boomed. Even analogue stalwart Moog has got on on the action, choosing to release its Animoog instrument as a phone/tablet app rather than a VST plugin. So, what's making these little devices so big?

Peter Kirn is the co-creator (along with James Grahame) of the MeeBlip - a "hackable, affordable digital synthesizer" that you can take anywhere. He tells us what inspired its creation.

"Whether on a phone/tablet or in a dedicated hardware box, the synth has suddenly become pocket-sized."

"We wanted to build and share something we wanted ourselves: something playable, something with physical controls, and an instrument that made distinctive sounds while staying in the classic mold of a monosynth. We loved the design features and sound of early analogue and digital synths alike. And we wanted to make the result fully open source and modifiable so that people could build on it."

Why is it, then, that synths such as the MeeBlip are currently so hot? "I think great popular instruments, electronic or not, are immediate, playable and accessible," says Kirn. "And small price and size matter, too, clearly. It's great that these synths are in reach to anyone who loves sound, whether or not they have a big studio or a deep wallet."

Accessibility and affordability are key factors behind the current mini synth boom, and these were undeniably characteristics of the Stylophone, the simple analogue instrument (and arguably the original mini synth) invented by Brian Jarvis in 1967.

This was resurrected in 2003 by Brian's son Ben, and he recently announced that an all-new Stylophone, the S2, will be released this year. Priced at £299, it's significantly more expensive than its predecessor - and, indeed, many other mini synths - so is Jarvis concerned that he's pricing himself out of the market?

"Our lead designer likened the reaction to 'McDonalds opening a Michelin-starred restaurant' - it'll take time for people to take it seriously. The S2 uses a metal PCB keyboard and has the Stylophone logo on it - that's where any similarities with previous Stylophones end. It's a rugged, metal-cased, high-end, hand-made, British analogue synth with a spec on a par with synths of three or four times the price."

This suggests that the mini synth market may actually be evolving: whereas just a couple of years ago we were happy with a fairly limited Korg Monotron or a simple iOS sound maker, now we're demanding more power from these portable instruments. In hindsight, it feels like Korg was testing the water with this initial foray into portable analogue terrain; it's released more fully realised products (the monotribe and Volcas) in response to its success.

But interestingly, Korg has simultaneously been developing relatively low-cost, high-spec iPad apps - the iMS-20 and iPolysix, for example. This makes us wonder if the company hoped to lure people in with these and then wean them onto the hardware.

"Whereas just a couple of years ago we were happy with a Korg Monotron or a simple iOS sound maker, now we're demanding more power from our portable instruments."

So is it the case that mobile apps have actually helped to drive the physical mini synth boom rather than compete with it? Ben Jarvis confirms that the app revolution did influence the design of the S2.

"Back in 2003 when we first began work on a new Stylophone and coined the name 'S2', the plan was to create a touchscreen digital pocket synth. The app market has totally changed the synth world over the last decade - no one is going to pay hundreds of pounds for something that does exactly the same thing that an app on their iPad can do for £4.99.

"We went back to what made the original '70s Stylophone so iconic - namely that it was unique in its sound and its mode of play; it was British-made; and it wasn't ashamed of what it was."

It's arguable that mini hardware synths meet a demand from users who are sick of virtual knobs, but it's also worth noting that, were it not for instrument apps, a lot of people wouldn't know what a synth was in the first place. Peter Kirn thinks there's room for both in the market.

"I think iOS and hardware complement one another," he says. "A picture of a knob on a touchscreen isn't as good as an actual knob. Likewise, for far-out new synthesis techniques and control methods, you want a computer, which is what an iOS gadget is.

"The demand for each is a reminder of just how much fun having these tools can be. And of course, the iPad makes a great MIDI sequencer for something like a MeeBlip - I use it that way."

There seems little doubt that mini synths - be they software or hardware - are here to stay for the foreseeable future, but how we actually use them is still slightly unclear. Yes, you can have great fun just fiddling around with one, but is it important that it can be used as part of a wider music making setup as well?

"The S2 sits well in the home/small studio environment, and we assumed a lot of its use would be as a box for generating sounds," Ben Jarvis tells us. "We did, however, always design it as a portable performance instrument; some of the best feedback we've had so far has been from gigging musicians who use it on stage.

"The CV vs MIDI decision was a largely practical one. This instrument is squarely aimed at the analogue scene, and adding MIDI would have been technically easy but physically challenging on such a tiny instrument."

"I'm always impressed by how important it is to users, even relative beginners, to be able to combine pieces of gear," says Peter Kirn. "Maybe it's because when you make music, you're constantly making connections in your head.

"Of course, the specifics of how that works vary tremendously. But I think it's important for us as makers to leave our creations open wherever it makes sense, whether that's through MIDI or hackability or just giving them choices as they make sounds. Musicians are finding endless means to make instruments their own because music is so personal."

Indeed it is, and it seems likely that we all have different reasons for wanting to own a mini synth, too. What's certain is that, whether on your phone or in a box, these instruments are proving to be both fun and inspirational, and we're all starting to appreciate the little things in our musical lives.

This article originally appeared in issue 191 of Computer Music magazine.