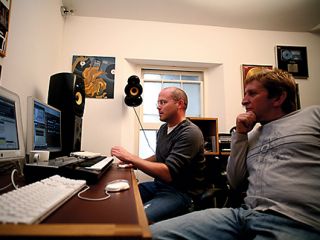 In demand remixers Freemasons at work in the studio.

Spawned by the disco and reggae scenes of the '70s, the culture of remixing has grown to the point that it's now one of the biggest in today's music business. These days, regardless of genre, it's rare for a hit record to be released without an accompanying rework or two.

While some remixes do little more than extend their source track's running time, others are so different that they practically become new songs in their own right. What's more, there have been instances where a remix has transcended the original track to become the de facto version.

It's high time, then, that MusicRadar celebrated the art of remixing by asking you to nominate the greatest one of all time. It doesn't matter if your favourite is a remix that made a previously little-known track famous, or a bold reworking of an existing classic - we just want you to name it.

To give you some guidance, you might want to check out the 14 greatest remixes ever, in which a range of producers pick their favourites, but ultimately, it's up to you.

It's simple: just give us the title of what you think is the greatest remix of all time in one of the following ways:

Based on your nominations, we'll then come up with a shortlist of great remixes and let you vote for your favourite.