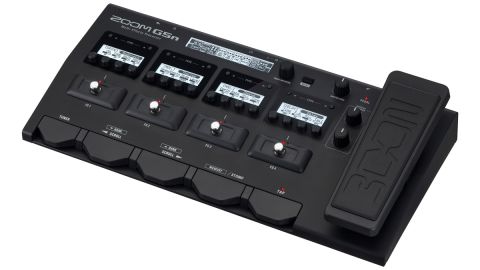 As far as rig-in-a-box pedals go, it's a bargain.

The G5 is Zoom's flagship product, and this tweaked update from the multi-effects specialist promises a bevy of amp sims and effects for even more fun.

At home, it's a handy practice tool, with a headphone output, onboard drum rhythms, 80-second looper and aux input for a music player.

For recording, you get a USB audio connection direct to your computer, and on stage you can run the G5n straight into the PA, making the most of the amp and speaker sims - or you can use it effects-only, as a complete pedalboard in front of your amp.

With 200 memory locations spread across 50 banks of four - you can run as many as nine simultaneous effects per patch - though be aware that DSP-hungry combinations can limit that number.

Amps take up two blocks and speaker sims take up one, while the looper and drum machine take up one each.

Taking a leaf out of Fractal's book, Zoom says that the G5n will be the gift that keeps giving, as monthly firmware updates will add new amps and effect models - our review model features five amps and their appropriate speaker cabs, plus 68 effects.

A well thought-out switching set-up makes live use easy. The top row of footswitches offers instant access to the four patches in a bank or switching four of the effects in a patch, depending on whether you are in Memory or Stomp mode.

You can switch between these modes using one of the five switches in the lower row, which also offer tuner access, tap tempo and a scrolling function - either to change banks or, in Stomp mode, to effectively move the upper footswitches to access more of the effects in a patch. Remember, you can have up to nine, but there are only four footswitches, so set those patches up carefully...

The amp and cab models are pretty standard, including classic Marshall, Fender and Vox models. They cover plenty of tonal territory for recording, and could cut it for live work straight into a PA - the footswitch for the second block is even set up as a solo boost.

The effects cover just about every overdrive and distortion you could need, while reverbs, delays and modulation effects, particularly the tremolo, are impressive.

We really like the treadle-operated ChromeWah, too - no need to fork out for a separate pedal here.

At around the fifth of the price, the G5n is in a different sonic league to the likes of the Line 6 Helix or Fractal AX8, but its flexibility and huge range of sounds mean it could fulfil similar roles for anyone who can't afford those mega-processors.