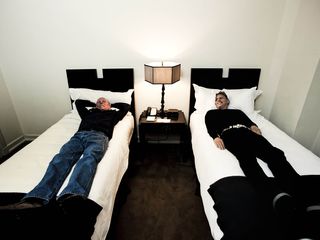 Vince Clarke and Martin Gore: hard at work, as you can see. (Image credit: Travis Shinn)

Depeche Mode founding members Vince Clarke and Martin Gore have announced that they will be releasing techno-inspired music under the name VCMG. Clarke left Depeche Mode in 1981 following the release of the band's first album, so this will be the first time that the pair have collaborated in 30 years.

"I've been getting into and listening to a lot of minimal dance music and I got really intrigued by all the sounds… I realised I needed a collaborator… so it occurred to me to talk to Martin," says Clarke.

"Out of the blue I got an e-mail from Vince just saying, 'I'm interested in making a techno album. Are you interested in collaborating?' This was maybe a year ago. He said, 'No pressure, no deadlines,' so I said, 'OK'," explains Gore.

The two artists didn't actually start working together until May 2011 --up until then, they'd be recording remotely in their own studios, exchanging emails and files.

The as-yet-untitled album is scheduled for release on Mute in Spring 2012. It's being produced by Clarke and Gore and mixed by Californian electronic artist Überzone/Q.

Prior to that, we can look forward to an EP entitled Spock. This will feature remixes by Edit-Select, Regis, Zak (AKA DVS1) and Überzone/Q under his XOQ alter ego. The EP will be available digitally from 30 November on Beatport, on other platforms from 12 December and as a 12-inch from 19 December.