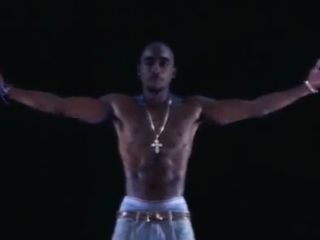 Maybe the Olympics organizers weren't so stupid after all. Less than a week after the planners behind the global sporting event asked (the late) Keith Moon to perform at the games, another deceased music star stole the show at Coachella late last evening (15 April).

Dr Dre and Snoop Dogg were on the bill, and they were even joined by Eminem - but the three hip-hop superstars didn't hold a candle to the eerily realistic hologram of Tupac Shakur, dead since 1996, that bellowed, "What the fuck is up, Coachella!"

The Tupac hologram (Tupac-a-Gram?) first performed a solo version of Hail Mary and was then joined by Snoop for a roll through of 2 Of Amerikaz Most Wanted. (Somewhat ironically, the song with the famous chorus line "Ain't nothin' but a gangsta party" was released the year of Shakur's death.)

The hologram barely had time to leave the stage when a Twitter user set up an account called @HologramTupac. In less than one day it's racked over 3500 followers along with comments such as "I could have sworn I died with a shirt on," "Get ready for my new album - All Eyez Thru Me" and "So many digital haters. Only Tron can judge me."

According to the company responsible for creating the hologram, the idea came from Dr. Dre. "We worked with Dr. Dre on this, and it was Dre's vision to bring this back to life," Nick Smith, president of AV Concepts, told MTV. "It was his idea from the very beginning and we worked with him and his camp to utilize the technology to make it come to life."

Smith didn't reveal the cost for the illusion, but he said that a comparable one would range anywhere between $100,000 and $400,000. "I can't say how much that event cost, but I can say it's affordable in the sense that if we had to bring entertainers around world and create concerts across the country, we could put [artists] in every venue in the country," he said.