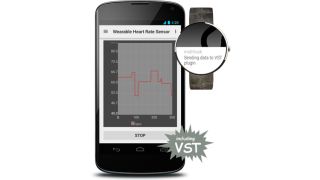 Don't ask us how we know, but we think that watch is sending data to the VST plugin.

Hollyhook's new midiHook system comprises an Android app and VST plugin, and promises to turn sensor and other measurement data generated by your Android smartphone or wearable (eg, a watch) into MIDI control data.

In the case of Android phones and wearables, data generated by the accelerometer, gravity and linear acceleration sensors can be used. Additionally, the light, GPS distance from starting point, proximity and compass orientation sensors on your phone can be employed.

One further benefit for Android wearable owners is that MIDI data can be generated from the heart rate monitor.

To use the midiHook beta you'll need to install the free Android app that can be downloaded from Google Play. You'll also need the free VST 2.4 Windows plugin, which is available from the Hollyhook website. This enables you to configure MIDI controller numbers and scale the measurements by defining upper and lower range values.