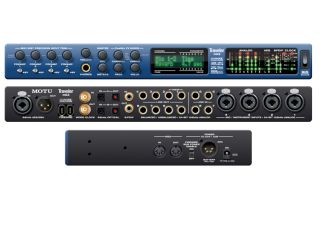 The Traveler-mk3 enables you to make high-quality recordings anywhere.

Ever since it was first launched, MOTU's Traveler has been an extremely highly-regarded portable audio interface. Now it's set to get even better, as the company has released spec details of the forthcoming mk3 version.

A bus-powered FireWire device, the Traveler-mk3 can also run on batteries, and comes with a heady complement of 28 inputs and 30 outputs.

Other new features include 32-bit floating-point DSP for onboard effects and mixing and two banks of configurable optical I/O.

The Traveler-mk3 is set to ship in the first quarter of 2009 - you can find out more on the MOTU website. It's Mac- and PC-compatible and will come with an updated version of the AudioDesk DAW (OS X only).

The price will be the same as for the previous version of the Traveler.