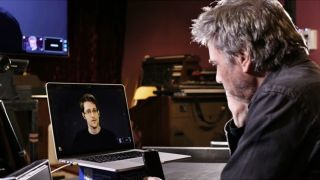 We've seen some unlikely collaborations in our time, but few have come quite so out of left field as the one between French electronic music pioneer Jean-Michel Jarre and US whistleblower Edward Snowden.

Though we're disappointed to report that Snowden's guest slot on new Jarre track Exit doesn't feature him blowing an actual whistle, he has contributed a spoken word section.

Discussing the song, which is taken from his forthcoming album Electronica Vol 2: The Heart Of Noise, Jarre said: "I wrote a speedy techno track evoking the constant and hectic production of data and the obsessive quest for more information. I then linked the music with this mad hunt and chase in order to get hold of people like Edward Snowden."

"One of the recurrent themes of Electronica Vol. 1 & 2 is the ambiguous relationship we have with technology. On one side we have the world in our pocket and on the other side, the world is spying on us constantly. Edward Snowden became a modern hero, not by saying 'stop', but to be careful regarding the (ab)use of technology. Our future needs brave people like him."

Snowden has also had his say, adding: "You have a choice and 'Exit,' whether it's used as a noun or a verb, is something which we pursue. It's something where we direct ourselves. It's about an action which may change everything from where we are to another direction, a departure to somewhere else."

Electronica Vol 2: The Heart Of Noise will be released on 6 May and is available for pre-order. You can listen to Exit now on all major streaming platforms.