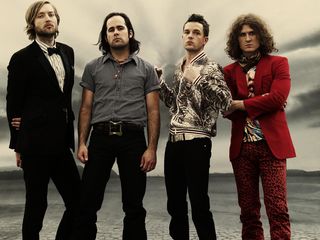 Neil Tennant, singer with UK pop duo The Pet Shop Boys, has scotched rumours that his band will be performing with The Killers at next week's Brit Awards ceremony.

The Pet Shop Boys are due to pick up an outstanding achievement prize, and will be closing the show. However, Tennant told The BBC that reports that they're to share the stage with the Las Vegan four-piece were "made up by the papers".

However, he also revealed that: "There will be two guests for our performance, but I'd like it to be a surprise."

Collaborations are now part and parcel of The Brits experience, and we can expect to see more of them on 18 February. Estelle and The Ting Tings are among those lined up to duet, while live performances from Coldplay, Duffy, Girls Aloud, Kings Of Leon, Take That and U2 are also scheduled.

The event will be hosted by Kylie Minogue and Gavin & Stacey stars James Corden and Matthew Horne.