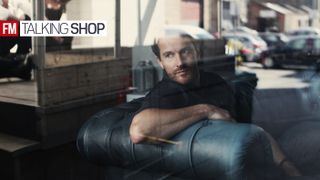 Following releases on labels including Kompakt, Cocoon, 2020vision and Playhouse, 2015 has seen London-based producer and DJ Simon Baker branch out on his own, creating his own imprint to showcase his work under the name BKR Projekt.

With the second BKR release out now, Future Music caught up with the Techno musician to find out more about his studio and approach to production.

"It was about 12 years ago. I bought an all-in-one studio box called a Yamaha Rm1x. It was a natural progression from DJing in my bedroom to this. I had been DJing many, many years before I decided to produce anything. I was a very late starter - around 27 years old - I had a lot of music stuff going on in my head and I needed to get out. It just started with programming beats on this thing, and things developed from there. It was a great piece of kit to learn on and kicked my career off. I upgraded to the Yamaha RS700 after a year or so, which I still have and love to this day."

"I was renting a studio away from home for the last six years or so, until the past year when I bought a flat in London so turned my spare room into my studio. I was really worried about neighbours and noise levels and working at night and so on. I was going to spend £7000 on soundproofing a 'room in a room', and turns out it would have been a waste of money, new flats are built better than I realised these days. I've had one complaint in a year! Absolute result!

"I use mainly hardware for building my ideas, then I whack it all into Logic where I add to it with plugins and additional software sounds if needed. I started on hardware so find that much easier to get things rolling with. I am very much a hands on tweaky kind of guy."

"Logic from day one. I sometimes use Ableton for certain tasks, but 90% logic. I actually prefer Logic 9 over the new Logic Pro X, but for some reason since I upgraded my OS to Yosemite, it's all gone tits up and I don't have much choice but to use X Pro now. It does the job but there's lots I don't like about it. I am trying to find a way to go back to my Logic 9 set up as we speak. I found it much more intuitive. Can anyone help me with that?"

"My Elektron Octatrack sampler. It's a beast. It's changed my life in the studio, I start all my ideas with this. It is now the heart of my set up along side the Yamaha RS700 and Juno 106. Those three things can write some great ideas. I am considering getting a second Octatrack so I have more flexibility with the number of tracks, as they are limited to eight."

"Actually it's a stereo valve tube compressor I am borrowing from a mate, Tl Audio Fat Man. It's a kind of cheap bit of kit, and studio snobs will no doubt turn their noses up at it, but it does the job I need it to do which is to warm up and distort certain drums as I record them in. It gives them some beefy punch I didn't have before. I run this through my SSL X-Desk too, which also gives it the added warmth needed."

"I've always fancied a Roland Jupiter 8 actually, keep toying with the idea, but dream kit would be something like an SSL AWS desk. Only £50,000 so should be no problem! My SSL X-Desk is great but it's a small section of a larger desk. I'd like some SSL EQs and compressors onboard. I will add to the X-Desk at some point. You can buy add ons. I am looking at getting the new Dave Smith Pro 2 next."

"Well, at the moment I always start with the Octatrack. I change the samples within it fairly often and this is what makes it so versatile. I can start with drums, or vocals or synths, just jamming and manipulating into cool rhythms until I feel a groove. Then I will build around that with other bits of kit. It's different every time, but I would say more often than not it's drums first."

"I have started a new project called BKR Projekt - it's my new production name and the name of the label just for my music (initially anyway.) It's kind of going back to where I started eight years ago on Playhouse records with my hit Plastik, making much more stripped back Techno and Tech House sounds. I've just released BKR002. It's a vinyl, hand-stamped affair the digital later on. Keep an eye out for the Yorkshire Terrier dancing dog!

"Also I've just done a remix for Niko Gala, and one on Moonharbour under the new BKR moniker. I also have a release under my other production name "Bakers-Dozen" due out on Pokerflat (The EP is called Forward To The Past 85-92) Old school House vibes."

"I keep a folder of my own kick drums. I will often layer two or three kicks together to get a much stronger one. You need to EQ these cleverly so the frequencies sit together well, but you just use your ears for this until you are happy with the perfect 'umph'! I try not to use the same kick more than a couple of times in tracks. I think that's just lazy, I prefer to find new ones that fit the new tune perfectly."

Recording back in the box

"This won't apply to everyone, but I will often loop record certain sounds from the DAW out through my desk (SSL X-Desk) and back through a tube compressor into Logic. This gives some added grit and warmth to drums, and the desk often provides more stereo width and warmth on synth sounds. You get a much fuller mix doing it this way albeit time consuming."

Manipulate the fuck out of everything

"I use mainly audio from outboard synths and drum machines. When I finally have an idea up and running its time to throw the parts into Logic. I wiil record each part separately with long sessions tweaking and messing around with the sounds for ages so I have tons to play with once I start the sequencing process. More mistakes the better, I say. A lot of my weird sounds are just shit I didn't mean do but found later into editing the tune."