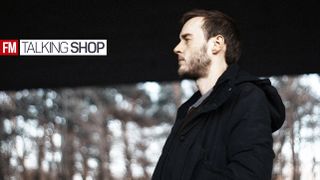 LTO is a Bristol-based producer and member of excellent Ambient electronic outfit Old Apparatus. Having made a name for himself over the past few years with a string of intricate, atmospheric bass-driven productions, both solo and as part of the collective, 2016 has seen the release of his first solo full-length, The Number From Which All Things Come.

FM caught up with LTO to find out more about the gear, influences and techniques behind his sound.

"As a kid, I used to like working out theme tunes like X-Files and the ASDA advert on the piano. Hard to say when I first started writing my own stuff though but maybe early teens. I used to record little ideas on this really basic keyboard (I can't remember what it was now) but I managed to persuade my Dad to get me a Roland XP60 workstation so I could track multiple parts with better quality sounds. Most of the stuff I wrote on that sounded like computer game music I think.

"I also really got into the playstation game Music 2000, which was my first introduction to using a DAW style program."

"I'm still just using the corner of my bedroom for producing and pretty tight for space in my current place, which puts me off buying hardware so I'm mostly using plugins at the moment. I'm hoping to buy a place at some point with a dedicated studio and one of the first things I'll buy for it is an acoustic piano.

"I have a Roland RD-300SX digital piano which has served me well and I've always been happy with the feel of it. I bought a second hand Roland JP-8000 a few years ago, mainly for playing live with Old Apparatus. I like the hands-on analogue style interface and versatility.

"I more recently got a Waldorf Blofeld, which is also a versatile synth and has really flexible modulation/routing options that allow you to create pretty mental FM-style effects. The drive option on the filters is also a nice feature for adding some warmth and lofi-ness.

"I also have an Ableton Push, which is good fun although I don't use it as much as I'd like as I'm so much quicker using the mouse and keyboard."

"I have been using Ableton for over ten years. I was studying Creative Music Technology at uni and mostly using Cubase at the time. I read a review of Ableton version 4 in Sound On Sound and was immediately sold. I'd not heard of it before but read that it was a major update as you could now sequence MIDI. The immediacy and fun factor appealed to me and I was also intrigued by the non-timeline, loop-based workflow of the session view."

"If we're talking hardware then I guess my RD-300SX piano as it's where a lot of my ideas begin. I'm constantly using it as a controller for various soft synths and sample libraries.

"If we're talking software then Ableton. It would probably be healthy for my creativity to try using an alternative tracking/sequencing tool but I haven't managed to bring myself to do it yet as I know the program inside out."

"The last piece of hardware I bought was a second hand Alesis ControlPad so I can bash out some drum samples in my live show. It's really simple - purely a MIDI controller with no built in audio capabilities. I would have gone for a Roland model if I had the dosh as they're apparently more sensitive but I'm only using it to trigger one or two samples per song so for that it does the job."

What dream bit of gear would you love to have in your studio?

"Really varies but I guess I usually start by building up lots of loops that work with each other in Ableton's session view. Sometimes I'll start with an instrument that I'm jamming with on the keyboard or sometimes by building up a drum pattern on the Push."

"I can't say much but expect something a bit different in the new year."

"One of the most important lessons I've learnt in producing/mixing is to adjust the output gain of any effects added so the perceived volume is roughly the same when turned on or off. This way you can accurately assess if the effect is improving the sound rather than just making it louder. I don't now if this is standard practice but it seems like common sense to me, yet it doesn't seem to get mentioned much in educational material. I find even effects with auto-makeup gain (usually compressors) are too generous so I just apply it manually by ear."

"I find producing music involves a delicate balance of right brain creative processes and left brain technical ones. From collaborating with and watching other producers at work I often feel that they often let the technical brain take over too early on in the production process. This immediately stunts the creative flow.

"For example, you're messing around with some unconventional FX plug-in getting some mad sounds with no idea how you got there. Instead of loading up an audio track to record that stuff into ASAP before you loose it forever, you put your technical/logical head on and say to yourself, 'Oh' I better check these parameters are within suitable ranges before I commit to recording.' You then lose the magic. Or if you play in some MIDI live and it doesn't look that tight on the grid, so you automatically hit quantise and then wonder why it doesn't lock into the groove of the rest of the track anymore."

"I've always found the idea of sitting down at my desk and thinking, 'Today I want to write a track in the style of so and so' a bit strange, yet I suspect many producers do it. I've always allowed music to influence me naturally without consciously trying to write in the style of someone else. Often a good listening session or going to a gig will replenish my inspiration and I'll have an irresistible urge to make my own noise. What comes out of that writing session is inevitably influenced by what inspired me to have it, but at a subtle subconscious level.

Having said that, I can see the value in purposely trying to imitate a track or style in order to break out of old habits or to explore writing in unfamiliar genres."