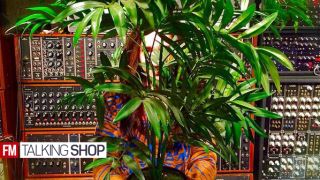 The LP - which was mixed at MemeTune, the London studio-come-modular Mecca owned veteran synth experimenter Benge - is a fascinating amalgamation of earthy folk influences and creative electronic experiments, blending Bernholz's raw, almost choral vocals with dark synths and heavily manipulated samples. To mark its release, FM caught up with Elizabeth Bernholz to find out more about her approach to production...

"My earliest memory of composing was around aged seven or eight when I starting multi-tracking my descant recorder using two cassette decks. I have to'd and fro'd many times with the method of composition and style ever since. Going from dark synthesizer music in my early teens, to writing an a capella choral mass in my late teens (multi-tracking my voice into Cubase).

"I only really embraced electronic music again in my mid twenties after I had exhausted my enthusiasm for writing chamber music - compositions that were rarely performed let alone recorded. It was 2009 when I really began writing and producing in the way I do now. I'm probably due for a retreat into acoustic music in a few years when my attention span gets clogged up again."

"I use my second bedroom at home as a studio and share it with my husband. It's very basic digital setup, but I like working with minimal gear in the writing and recording process because it pushes creativity and instinct a bit further. I get too overwhelmed starting a new project in a full kitted out studio.

"I try to keep plug-ins to a minimum if I can, and prefer to use samples for as much as possible where I can. For Unflesh, I wrote, recorded and produced everything at home, then took it to an analogue studio in London called MemeTune to work with Benge on bringing some aspects out of the digital realm and into another dimension for extra production and mixing. We replaced a lot of the digital parts with real hardware, mostly vintage synths and effects units like the CS80, Linn-1, and Roland SDD-320 Dimension D Chorus.

"I bought Ableton in 2009 and I haven't upgraded since. I really just use it just as a sequencer more than anything. It's excellent for the way I write, which is very improvisatory and instinctive. I don't take ages to prepare things or labour over multiple takes and settings. I believe in the first or second take in most cases.

"I like to have everything at the touch of a button so that I can experiment freely. Ableton is perfect for that. I always prefer to sculpt sounds and build drums from my own vocal samples or my own recordings, and sometimes just what's in front of me like a box of tiddlywinks or a glass of water - so it's perfect for that sensibility."

"A fairly decent pair of monitors with plenty of sub are really the most important thing for me in terms of mixing and production. I use Yamaha HS80s which do the job for the first part of the process. I also use my VE20 effects pedal a lot during composing and working out vocal sounds which I can perform live. It's the only piece of gear I use live, so without it I would feel very naked."

"The latest album was mixed on an MCI console from 1974. I would love to own that at home although it wouldn't fit in the room. It's an extremely temperamental but beautiful thing to work with. Anything sounds better through an analogue desk like that."

"Beats are the most instinctive thing to begin with as I get sense of something moving forward. I always find that a beat and a baseline work best to form the skeleton of a track, but sometimes it's good to shake things up and do it differently. I really like to loop found or homemade samples and hear melodies, or beats or harmonic overtones in those, and start building from there. Other times I'll start with a vocal line and build outwards."

"I only finished the new album a few months ago, but soon I will be back in the studio to start on some remixes and new collaborations for 2015, before setting off on tour this Autumn in October and November. I can't reveal what it is until later in the year, but also just finished a project under one of my other pseudonyms 'NEWT' underscoring a music documentary which will come out in 2015. It has been a really surprising project to work on as it involves a major pop group, that I never thought I would be working with. It was totally bizarre but really enlightening project."

Build your own sounds

"Plugins, presets are great fun to play with, but so many people create music using the same sounds. I really value creating sounds from scratch including kits and synths. You can use any (cleared) sample to create these and it will always be totally unique."

Don't lose the quality of a vocal through over-production

"Electronic music tends to feature heavy processing, which can be great, but often with vocals, if there is too much processing, especially on the sibilance and tone, you really change the natural resonance of someone's voice and can lose essential qualities of it."

"Some of my favourite music uses silence for impact, even the most aggressive noisy music can be all the better for having a bit of space. You definitely find this in Hip Hop. I always think less is more."