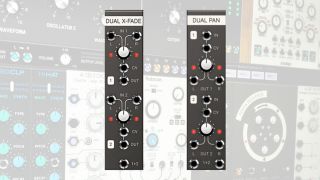 Softube has brought two new utility modules to its Modular software synth, as well as a slew of bug fixes and full Windows 10 compatibility.

The two modules in question are the Dual X-Fade and Dual Pan. The X-Fade gives you the ability to blend two mono signals, aiding in the creation of new and interesting textures.

By patching in two signals, you can morph seamlessly between them by either manually adjusting the blend knob, or controlling the knob with an LFO via CV.

The Dual Pan module enables you to place two mono signals anywhere within the stereo field. It also doubles up as an A/B switch to send a CV or audio signal to two different inputs.

Alongside the new modules, Softube has also added full Windows 10 compatibility with a whole bunch of bug fixes. These include fixing a problem with crashes in some Windows 10 DAWs, such as Studio One, Sonar and Pro Tools. It's a change that, unfortunately, means that it is no longer possible to run the Modular plugin in Windows XP or Vista.

Both modules are free to existing Softube Modular users and available as part of version 2.3.76, which can be found on the Softube download page. For the full list of bug fixes check out the change log.