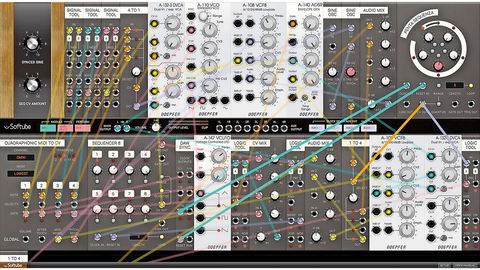 Excellent value, lots of fun, and sonically powerful - a must-buy, especially for those considering entering the modular hardware fray.

Softube is best known for its emulation-oriented audio plug-ins aimed at capturing the sound of specific hardware units.

In more recent years this has extended into hybrid-hardware (Console 1), and virtual instruments, in the shape of the Heartbeat analogue drum module. Now Softube tackles perhaps one of the trickiest of beasts to distill into software form - the modular synthesizer system.

Whether it is because of the almost unlimited connectivity possibilities or even the ease of self-justification when buying small affordable modules, the current patching madness sees no sign of abating.

This is perhaps where the modern story of sound synthesis starts, particularly with Bob Moog and Don Buchla, two of the most famous names associated with synthesis of this kind in the '60s. Moog, of course, choose to embrace synthesis as a more conventional playable instrument, while Buchla chose a more unconventional approach to control. We now have the benefit of choosing modules from a whole host of manufacturers, with recreations of older designs as well as new ones.

Doepfer came to the game in the mid-'90s before it was fashionable, introducing an ever-expanding range of affordable modules in the A-100 series. This is where Softube picks up, with six from the range included in Modular - a VCO, VCF, Dual VCA, ADSR, Noise/Random and VCLFO.

The A-110 VCO is a simple oscillator module with four independent waveshapes. Tuning, oscillator sync and pulsewidth of the square wave can come under external CV control. Adding this to the modular rack, and plugging one of the waveform outputs to the main plug-in output will result in a constant tone of fixed pitch.

This will be obvious to any hardware modular user, but demonstrates in very straightforward terms that in any system like this you'll need to get patching for even the simplest tasks. In this case, you will need to call on the MIDI TO CV module to turn MIDI notes into a CV (routed to the VCO CV1 input) to be able to play notes in any conventional sense; and this is only the beginning.

The A-118 Noise/Random adds some dirt to the sound source selection and allows you to harness white noise as well as a separately coloured variant. The Random Output is used for much slower-moving noise-base modulation duties.

A-108 VCF is a Moog-style filter that offers 1, 2, 4 and 8-pole low-pass filter outputs as well as variable width band-pass. Multiple CV inputs can be mixed together to alter cutoff, and there's independent control over feedback (an old Minimoog trick). The A-132-3 Dual VCA is a straightforward combination of two independent voltage controlled attenuator modules with manual gain and CV input.

The two core modulation sources are the A-140 ADSR and A-147 VCLFO. Usefully, the envelope has three selectable time ranges. The LFO, like the audio oscillator, provides four independently shaped outputs, and CV control over LFO rate (that runs from 0.01-50Hz).

The Doepfer selection is small, and would be relatively limited in hardware form if bolted into a small rack. However, this is far from the whole story here. You can use as many of each module as your CPU can handle, and Softube have included a host of their own modules. This extends from splitters and mixers to a bunch of simple modulators and generators, plus a lowly audio delay effect.

Three CV step sequencers (16, 8 and 5-step types) are included alongside a 4-track, variable length, beat sequencer. Should you wish to provide a more streamlined way of interacting with any of your hard-won patches there are 20 Performance Panels for adding simple switches, knobs and indicators.

As mentioned, like any hardware system, you need a way to turn MIDI messages and those from your DAW into something voltage-based (virtually speaking). There are modules converting digital inputs to CV and trigger messages in a pretty comprehensive range of ways. The most intriguing one of these is Quadraphonic MIDI to CV, which can be used to create polyphonic and paraphonic patches in the style of the Oberheim Four Voice or Korg MonoPoly.

This isn't quite the full picture, as Heartbeat owners get access to eight of its generator modules from within Modular, while there are more flamboyant flavours available in the shape of three Intellijel modules (as paid-for extras).

Modular is certainly not the first piece of software to approach synthesis in this way - Reason is built on some similar concepts - but the fact that it includes modules from different named manufacturers is an interesting pointer of what may come.

If you are interested in taking the plunge into modular synthesis then this may be an interesting bit of research; there's even a Buy Hardware button on the relevant panels.

A Doepfer A-100 Mini System will set you back nearly £900, while Softube's new baby costs about the same as one module. It may be digital, but in sonic terms it sounds great, and the Aux Outputs allow you to interface directly with hardware for an interesting hybrid system. Highly recommended, wherever you stand on the digital vs analogue debate.