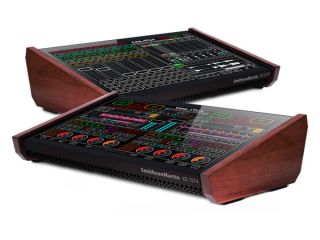 Smithson Martin has been turning heads for a while now thanks to its transparent Emulator DVS controller, and now it's launched a multi-touch product with a more conventional form factor in the shape of the Kontrol Surface 1974 (KS-1974).

This desktop device looks simultaneously futuristic and vintage, thanks to its 22-inch object-based display and wooden end panels. It offers four simultaneous touch points, and has a chemically-strengthened glass surface.

You can use the supplied objects (buttons, sliders, knobs, jog wheels and your own custom graphics) to create your own controller layouts; response is said to be "highly accurate" and low-latency.

Smithson Martin is accepting KS-1974 orders now for delivery in January 2012. We're still trying to establish how much it'll cost.