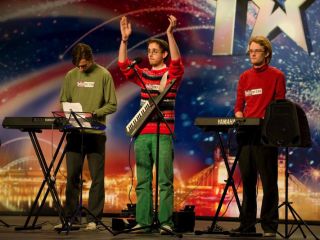 With Roland's AX-Synth set to be 2009's must-have gadget for music technology fashionistas, it's safe to say that the keytar is back.

However, news of the much-maligned instrument's resurgence has yet to reach Simon Cowell, who couldn't quite get a handle on The Brett Domino Trio's shtick when they auditioned for ITV's Britain's Got Talent.

Despite the pop mogul's reservations, Brett and his cohorts were voted through to the next round, ensuring that the keytar will take another step towards mainstream acceptance soon.

The band have posted a clip of their Britain's Got Talent performance on YouTube - you can watch it below.