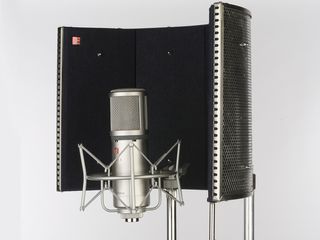 PRESS RELEASE: sE are shipping 4 new MI products to take the market by storm this Xmas, in one of the most exciting product roll-outs in the MI sector this decade.

"After a year of planning and researching the very best competitor deals and bundles, we think we've come up with 4, literally unbeatable, products in terms of performance to strategic price points" says MD James Ishmaev-Young

"While other companies scramble to bundle slow selling and overstocked products to bolster ailing sales of their key products, we have deliberately targeted the most important price points for customers and designed and built new products and bundles from scratch which best suit the end-users needs on an increasingly tight budget"

The aptly named X1 large diaphragm condenser is one of the coolest, sexiest new mics for the MI market in years. The mic is hand built in sE's own facility in Shanghai like all their products, and boasts a 10dB pad and bass cut to add to the hand crafted capsule.

There is not another brand on the market today building high quality, hand made mics anywhere near this price point. All are either OEM or mass produced on machines. The X1 is a new benchmark in quality of build and performance estimated to sell at only £99 and shipping in December!

Drawing on the massive success of the industry standard Reflexion Filter, sE have released a new entry level version in response to a raft of cheap and ineffective imitations coming from OEM brands onto the market.

None are able to match the performance of the original RF since they have to omit key elements of design which are fundamental to the proper function of the product due to the patents sE have pending on the original RF; in other words they may look similar but that's where it ends!

sE are not encumbered in the same way, and so have managed to produce a Reflexion Filter, which though cut down from the Pro version, performs far better than the cheap copies, and allows the project studio owner to get closer to the pro performance of the RF, which itself has sold more than 50,000 units in the EU alone since its release!

The Project Studio RF uses the same basic design, omitting the multiple layers and acoustic boundaries of the pro version and replacing them with the same, patented, polyester acoustic board that graces the RF. The new baby RF is then lined with a high grade, high density crystal foam with a unique curved ridge cut which performs far better than standard acoustic foam.

The result is a true Reflexion Filter product, designed and built by sE, which does the job and is estimated to hit the streets at a stunning £99 in December

sE are also releasing 2 new Super-bundles: sE X1 and Project Studio RF bundle at £169 inc vat - a true, hand built, LDC and Reflexion Filter product expected to sell for only £169 including vat; less than key competitors sell a mass produced mic with a pop shield for!

sE2200a and Reflexion Filter Bundle: the No.1 selling mic at its price in the UK, with the best selling portable acoustic product on the market today bundled with the shock mount in one box and expected to sell for under £300.

This is a star buy since they are 2 of the best selling products on the market right now which retail at £440 and currently street at about £360 from most UK dealers, meaning this bundle effectively gives the end user a real 20% off the current best selling price! A sure fire winner…