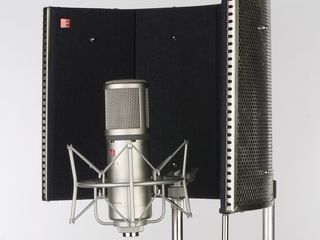 PRESS RELEASE: In addition to the permanent Super-bundles on offer, the X1 with baby RF and the 2200a with RF Pro, sE Electronics are giving away a FREE Project Studio Reflexion Filter worth £120 inc vat (estimated to street at €110 ex vat) with the following condenser mics:

This incredible deal will run for 3 months from 28 July until 31 October. The Project Studio Reflexion Filter, AKA the 'Baby RF' will be available in store at the point of purchase when buying the sE mic of your choice. No on-line registration, no additional online payment, no waiting for delivery and no hassle! When you purchase your sE mic you'll be immediately given the Baby RF free of charge in the store (or by delivery with the mic if ordered online).

Importantly, the Baby RF is an acoustic product, which really works, whereas cheap 'foam only' alternatives may actually harm your mix, rather than help it.

Foam acoustic products allow most frequencies to pass straight through with very little absorption, and are only really effective for HF (High Frequency). They may be cheaper, but they can actually make a mix worse, not better, removing HF which later needs to be added back in, creating noise, while leaving the problematical mid and low frequencies completely untreated. With Multiple layer technology, RF products are portable devices, which really work.

The Baby RF draws on the massive success of the industry standard Reflexion Filter, and sE have released this new version in response to a raft of cheap and ineffective imitations coming from OEM brands onto the market. None are able to match the performance of the original RF since they have to omit key elements of design which are fundamental to the proper function of the product, due to the patents sE have pending on the original RF; in other words they may look similar but that's where it ends.

sE are not encumbered in the same way, and so have managed to produce a Reflexion Filter, which though cut down from the Pro version, performs far better than the cheap copies, and allows the project studio owner to get closer to the pro performance of the RF, which itself has sold more than 50,000 units in the EU alone since its release.

The Project Studio RF uses the same basic design, omitting the multiple layers and acoustic boundaries of the pro version and replacing them with the same, patented, polyester acoustic board that graces the RF. The new baby RF is then lined with a high grade, high density crystal foam with a unique curved ridge cut which, together with the acoustic fibre board performs far better than standard acoustic foam. The result is a true Reflexion Filter product, designed and built by sE, which does the job and is estimated to hit the streets at a stunning £120 inc vat (c.€110 ex vat), now FREE while this offer lasts.