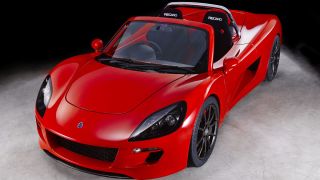 Who fancies a filter sweep when they floor it?

It's hard to second-guess what Roland is going to do next at the moment - given previous form, who would have thought that it would be working on a new range of modular analogue gear, for example? - but we certainly didn't expect the company to announce that it's developing an in-car synth system for an electric sports car.

That's what's happening, though; the new vehicle from GLM is set to be Japan's first mass-marketed electric sports car, and the 'driving sound system' will be designed using Roland's SuperNATURAL synth technology.

We're told that the system will provide "dynamic and dramatic sounds that seamlessly change depending on real-time driving situations like acceleration, deceleration, and motor load variances on sloping roads." The synth engine will also provide "ingenious neo-futuristic sounds that will give sports car enthusiasts the experience of driving a space ship on the road."

While environmental concerns mean that electric cars are becoming increasingly popular, the theory is that many drivers - particularly those of high-performance cars - will want inspiring sounds to replace those generated by a traditional engine. Roland says that its synth technology is a better option than sample-based methods, as it can be more responsive.

Sounds will be played through the car's stereo speakers, while the 'driving situation' will be detected in real-time by a car-mounted network that measures speed, pressure on the accelerator pedal and load to the power system. Drivers will be able to select from a range of sounds - we guess there'll also be a market for expansion packs.

The Roland driving sound system (pictured below) will be available in GLM's ZZ model from the Autumn.