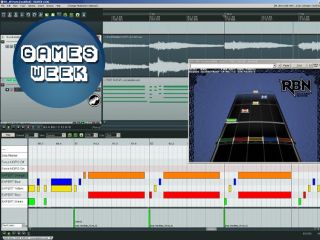 The Reaper DAW is used to author Rock Band songs.

WaveGroup is a San Francisco-based audio production company that's been heavily involved in producing music for both the Guitar Hero and Rock band franchises.

Recently, it's been working with games developer Harmonix on the Rock Band Network, a new distribution platform that enables you to get your songs into Rock Band - and into the hands of anyone who plays it.

We spoke to Will Littlejohn, President/CEO of WaveGroup, and he explained what Rock Band Network is, what you need to do to get involved and what kind of impact it might have on the wider music business.

Can you explain, in a nutshell, what the Rock Band Network is and does?

WL: "Basically, The Rock Band Network is an avenue for artists and independent labels to distribute their music as playable Rock Band tracks in the form of downloadable content. For the first time, anyone has the ability to make their music playable in Rock Band."

What was your involvement in the creation of the Rock Band Network, and how are you contributing to it now?

WL: "WaveGroup was a part of the original beta team, so we were involved in the early stages of the tools and website development. Harmonix approached us and thought we were a natural fit for the program because of our history in music game development.

"We've worked with Harmonix on many music titles over the years, and this seemed like a very exciting opportunity for us. Over the course of the closed and open beta period, we worked with the Harmonix crew as well as other beta teams in fleshing out the whole process of moving a song through development and into the RBN store."

"Currently we're very active in bringing all types of artists and their music into the Rock Band Network, acting as the licensing agent and production arm for those who choose not to do it themselves. There are currently around 30 songs authored by WaveGroup which are in the RBN store."

What hardware and software is required for people to get their own music onto Rock Band Network, and how much does it cost?

WL: "One of the really great things about this whole program is the surprisingly low cost to do this work in terms of hardware and software. You really just need an Xbox, a computer, an Xbox Live Gold account, a Microsoft XNA creators account, some inexpensive digital audio workstation software, and some free plug-ins.

"The Xbox Live and XNA accounts cost around $150 a year, and the audio software, Reaper is available for $60. The free plug-ins are available on the RBN Creators Club website.

Could you briefly explain the process of getting your music onto Rock Band Network. Is it difficult?

WL: "In our process, we start by working with the artist to create several specialised mixes of their song called stems. These mixes only contain one instrument, examples being the lead vocal only or the lead guitar only. These mix stems are produced for all the instruments in the song. Think of these stems like pieces of a puzzle; when you put them all together and play them at the same time, you get the full mix of the song.

"Once we have these stems, we create very detailed maps of the vocals and each instrument in MIDI, which represent the vocal note tubes and colored gems in Rock Band. These maps are then scaled down for easier difficulty levels and thoroughly tested for playability in the game.

"At this point we have the instruments mapped, and need to create animation cues as well as camera and lighting moves. All of this is done with text events and calls some really great animation from a library of visuals created by Harmonix. When this process is complete, we bundle it all together and extensively test the song by playing it in the actual Rock Band environment. We'll make any adjustments we feel are necessary, then we upload it to the RBN Creators Club website where other RBN authors can test it and give us feedback. After the RBN community has had some time with the song, we'll take all of their suggestions and do a final round of revisions to the track.

"The final part of the process is called Peer Review, and this is where the RBN Creators Club community gives the song a final check before it moves into the store. If we get enough fellow creators to give our final version a thumbs up and no glaring problems are found, the song hits the store and is available for purchase.

"As for difficulty, I don't think it is particularly hard to do this work, but it is very detailed. Anyone can author their own song if they wish - they just need to have some patience and time to learn the process."

Do you think that there are any genres of music that are particularly suited to Rock Band, or does it all come down to the skill of the person converting the track to create a good gaming experience?

WL: "I personally think that some songs are particularly suited to Rock Band because of their rhythmic elements and how they translate into the game, but ultimately it comes down to the music. I suspect most people play a particular song in Rock Band because they simply like the song. Whether you're into speed metal or reggae, you'll play the songs you're into.

"The musicality and skill of the authoring also comes into play, as a poorly authored song will not give the strong connection to the music that Rock Band players crave. Our job as the translators of the music into gameplay is to make sure the experience is a great one when you load up your favourite music."

Do you think Rock Band Network has the potential to break new artists?

WL: "Absolutely! The Rock Band Network is a fantastic platform for any band to get exposure, and I'm sure it will play a vital role in breaking new artists. Lots of bands have already benefited greatly by being featured in rhythm music games such as Rock Band, and the RBN platform makes it possible for any artist to get their music out there for people to play. There are millions of Rock Band owners who have access to the songs on the Rock Band Network, and they are looking for the next great song to download."