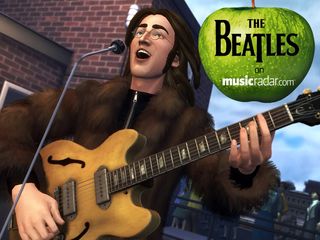 John Lennon 'Gets Back' on the Apple roofttop

I admit, I'm no gamer, but I found the prospect of 'jamming' along to The Fab Four on The Beatles: Rock Band filling my head with marshmallow cloud-like thoughts: I can finally play the Ed Sullivan Show! I can rock Shea Stadium! I can get up there on the Apple rooftop...You get the idea: I can be the 'fifth' Beatle.

OK, truth is, only four people on Earth (five if you count Pete Best) ever got the chance to experience being The Beatles. But thanks to some very refined avatars and scenic imagery, we get the next best thing. This is verisimilitude bordering on the next dimension - and reason enough for me to get the band together.

The group I assembled turned out to be a trio - my son, Gianni, on guitar, his friend Kenny Griffin, who played drums and sang (thank God, as I sure can't) and myself on bass. I stuck to the 'easy' (no fail) mode, while the two young show-offs went all 'expert' on me.

Although Harmonix delivered a review copy of the game several days before today's street date, they were fresh out of Beatles controllers - so alas, no Duo Jet, no Rickenbacker, no Hofner and no Ludwig drums. Already our faux Fab Three wasn't feeling fine.

All of that changed, however, once we clicked on our controllers and had girls going bonkers at our every move - this being in the eerily real-looking Cavern Club (Chapter 1); by the time we got to the 'Abbey Road years' (Chapters 5 thru 8), we were a studio band - you know, just like those other famous blokes.

Just how accurate is it?

From a visual standpoint, the locales, the costumes, the hairstyles and even, to varying degrees, the instruments The Beatles used, the game is spot-on. And it's tons of fun to play. This, however, presents a problem if you're trying to look beyond your onscreen fretboard - you become so immersed in hitting the right notes that you sometimes forget, or just can't, take in the images of The Beatles themselves.

Although we didn't make it through all 45 songs on the game, we did get through a lot of them, and here's how The Beatles: Rock Band stacks up for Fab Four accuracy.

The lineup of songs - Twist And Shout, Boys, Do You Want To Know A Secret? and I Saw Her Standing There - could very well have been played during one of The Beatles' final stands at the Liverpool basement where they apprenticed. So far, so good.

The instruments featured are true-to-life, as well: Paul plays a '61 Hofner bass, George has his Gretsch Duo Jet, John is strumming his '58 Rickenbacker 325 (still with its natural finish) and Ringo is playing a Premier kit with the drum head featuring the band's name in script type font with a 'B' that has beetle-like antenna.

From here, however, the game takes a series of liberties with setlists.

Looks-wise, the segment kicks butt, and the instruments are mostly on the money: Ringo is behind his Ludwig kit with the 'number two' Beatles logo (the lettering is quite heavy), Paul plays his '63 Hofner bass, George solos on his Gretsch Country Gentleman and John is seen sporting his Rick 325 which by then was painted black.

The setlist, however, is all over the place. When they made their first appearance on The Sullivan Show, The Beatles played All My Loving, Till There Was You (from The Music Man), She Loves You, I Saw Her Standing There and I Want To Hold Your Hand.

In Rock Band, the group performs I Want To Hold Your Hand, Can't Buy Me Love, I Wanna Be Your Man and A Hard Day's Night. Even during the band's subsequent Sullivan showings in February 1964, they didn't play the latter three songs. In fact, A Hard Day's Night (seen in the game with John strumming a Gibson J-160E) wasn't even written until The Beatles returned to England to shoot the film.

Another case of the avatars, costumes, setting and instruments hitting the right marks, but what's going on with the setlist?

On screen, John plays his new 1964 Rickenbacker, George alternates between a Gretsch Tennessean, Country Gentleman and a Rickenbacker 12-string; Paul plays his '63 Hofner (he had his '61 as a backup); and Ringo sits behind a Ludwig oyster black pearl Super Classic kit with the 'number five' Beatles logo.

Again, the outfits (striped suits), the setting (subdued screams - the Japanese weren't used to letting go at this time), the body movements of the avatars and the instruments (Epiphone Casinos for John and George, '63 Hofner for Paul, 'number six' bass head for Ringo) - everything looks and feels great.

And yet, the set is pure fiction: The Beatles play Day Tripper, And Your Bird Can Sing, Drive My Car, Taxman and Paperback Writer. During their real Budokan concerts, the group performed Day Tripper and Paperback Writer, but none of the other aforementioned songs. They did, however, play If I Needed Someone - couldn't that have been moved from the Shea Stadium gig?

With a song list that counts Yellow Submarine, Sgt Pepper's Lonely Hearts Club Band/With A Little Help From My Friends, Lucy In The Sky With Diamonds, Getting Better, Within You Without You/Tomorrow Never Knows (the mash-up from the Love soundtrack) and Good Morning, Good Morning, one certainly can't find fault here.

But now that we're in The Beatles' 'studio years,' a period in which songs were constructed piecemeal, it's difficult to tell sometimes what they played together, and in what fashion, although I'm quite sure that during Within You Without You, Harrison didn't sit cross-legged with a sitar while the rest of the band accompanied him. That didn't happen at all.

The songs - I Am The Walrus, Hello Goodbye, Hey Bulldog, Back In The USSR, Dear Prudence and While My Guitar Gently Weeps - all fit, as do the costumes and settings. But what to make of no Eric Clapton on the latter song? Oh dear, oh dear...

Fact is, it was a little strange watching my son guide his fingers to George Harrison playing the Gently Weeps solo (it has him pictured with a Gibson Les Paul, which is accurate to some extent, as EC gave George a model).

At the same time, it was odd seeing Kenny drum along to Ringo on Back In The USSR, as Paul played drums on The White Album's opening cut (Ringo famously walked out of the sessions, missing both this song and Dear Prudence).

But what a treat it was to watch Harrison (and Gianni) rip on the solo to Hey Bulldog. On screen, Harrison plays his SG - that works.

Helter Skelter, Revolution, Birthday, Octopus's Garden, Something, Come Together, Here Comes The Sun - the gang's all here. And I love the little details thrown in, such as Ringo using tea towels on his drums on Come Together (true dat).

Of the songs we tested, most checked out. Helter Skelter has The Beatles going apeshit, John on his Fender VI bass, George on a Les Paul and Paul on his Casino. And yes, Ringo most definitely has blisters on his fingers!

Come Together veers a wee bit from how the real cut went down: It sees Paul at one point on electric piano (John, in fact, played the parts in the studio). Paul is also portrayed as singing background vocals, when John famously told his partner to butt out. And John was also heavily bearded at the time. Just sayin'.

It was a school night, and we were only able to get through one more song, Get Back. From what I was able to gauge, the rooftop setting is accurately portrayed, with the exception of one Billy Preston - where did he go? Who's playing those keyboards? Billy?...Billy?

Otherwise, Get Back is a startling re-creation of the original: George plays his rosewood Telecaster, John plays - and solos on! - his stripped Casino, Paul is on his Hofner and Ringo plays his tea towel-draped Ludwig Hollywood kit.

Lennon even does his celebrated "I hope we passed the audition" bit at the end. Nice.

As a music-based video game, The Beatles: Rock Band is probably the most lovingly rendered, sophisticated product to hit the market. True, some might think of it as nothing more than elaborate karaoke (what are the other music-based games, then?), but if it exposes millions of young people to the exquisite Beatles canon, I say Let It Be.

As for myself, I've got a date with Gianni and his friends to run through the rest of the tunes (everybody on the street wants to play this thing now). And should I manage to one day nail 'expert,' my son with have no other choice than to pick up a real instrument.

That's the ultimate challenge, and one well worth accepting.