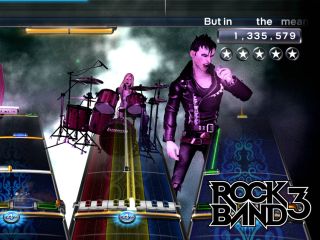 Will Rock Band 3 make you sound better than you actually are?

The forthcoming Rock Band 3 may be very much a game rather than a piece of serious music-making software, but thanks to respected music software developer iZotope, it's going to have some powerful real-time pitch correction and pitch shifting in it.

The company has licensed its technology to Rock Band creator Harmonix, and this should enable players of Rock Band 3 to sound like they're hitting the right notes even if they're not.

"The ability to have pitch correction in real-time helps to enhance the vocal gameplay and players' in-game performance in Rock Band," reckons Eran Egozy, CTO and co-founder of Harmonix.

"We're excited to feature iZotope's technology and this new middleware in Rock Band 3 so that our players can enjoy the type of vocal effects that professional rock stars utilise for live stage performances in their homes this holiday."

For his part, iZotope CEO Mark Ethier says: "Rock Band is an ideal platform for us to showcase iZotope's technology so we can provide gamers with studio-grade audio effects that professional mixers, sound designers and others in the entertainment industry have relied on for years."