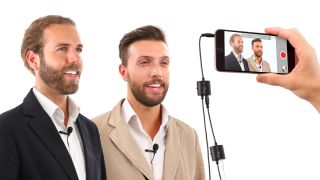 You'll be flushed with success

IK Multimedia has announced the latest addition to its mobile-centric iRig range, the Mic Lav.

Aimed at videographers, journalists and podcasters alike, the iRig Mic Lav is a omnidirectional lavalier microphone designed for use with compatible audio apps on iOS and Android device. The mic features built-in monitoring and you can also chain up to two mics at a time.

More information can be found on the IK multimedia website.