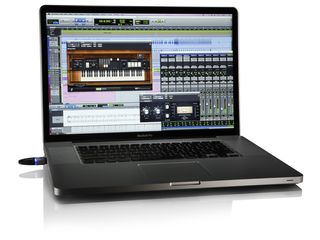 PRESS RELEASE: Avid today announced Pro Tools version 9 - a groundbreaking evolution of the industry's most popular music creation and audio production solution. Leveraging a next-generation architecture, version 9 of Pro Tools offers customers the unprecedented choice to work with Avid audio interfaces, third-party audio interfaces, or no hardware at all when using the built-in audio capabilities of a Mac or PC.

Pro Tools customers - from the aspiring enthusiast to the professional - can now create sophisticated, great sounding mixes, whether they're at home, on the road, or working in a large facility using an open, flexible workflow for enhanced collaboration and creativity.

Open, flexible workflows to work the way you want

Customers can design their workflow of choice using the new Pro Tools software-only configuration with their favourite Avid or third-party audio interface - or standalone - and with Avid Artist and Pro Series controllers. The benefits to users include:

· Versatile workflow design options—Enables customers to work the way they want using Pro Tools as a software only tool, or with hardware options that include either a variety of Avid audio interfaces for an Avid-advantaged workflow, or third-party audio interfaces as a result of new Core Audio and ASIO driver support.

As a result of customer requests, many high value features formerly available as add-ons are now available right out-of-the-box, including:

· Automatic Delay Compensation - Equips customers using version 9 of Pro Tools with the ability to create better sounding mixes faster. Users can now mix and record with increased alignment and phase accuracy, without the need to manually compensate for latencies from hardware I/Os, internal and external routing, and plug-in algorithm processing - the number one request on the Pro Tools IdeaScale User Forum.

A series of audio for picture enhancements provides customers with the ability to easily collaborate with other audio and video software users, including:

What customers are saying

Ulrich Wilde, producer and engineer for bands including Dethklok, Pantera and the Deftones, said: "One big thing about Pro Tools being an open platform is that I won't have to run two systems anymore. Right now I have a dedicated Pro Tools system and a dedicated Apogee system and I have to reboot with one or the other—now I can save space and time toggling between them. EUCON support is also huge for me as I'll be able to integrate Pro Tools into my studio workflow, which is based on Logic using an Artist Series controller."

According to Lyle Workman, composer for films such as The 40 Year Old Virgin and Knocked Up, and guitarist for performers including Sting, Beck and Shakira: "I can't think of a reason why someone wouldn't want to work in Pro Tools - it's for the person who's getting started, yet it's for the person in my world. It provides all of the advantages of smaller systems, yet works from my studio to the music editor's room to the stage. It's incredibly convenient that there are no cross-platform issues. It's just Pro Tools from soup to nuts!"

Jesse Keeler (aka JFK), artist and producer for MSTRKRFT, said: "The one barrier to total productivity for me while travelling has always been the lack of Pro Tools session portability. But now that Pro Tools is available as a software only package, Avid has made it so the same session can be worked on anywhere. For me, this feature alone is priceless."

Pricing and availability
Version 9 of the new Pro Tools and Pro Tools HD software will be available worldwide on 12 November 2010 starting at £430.00. For more information on features and availability, visit: www.avid.com.