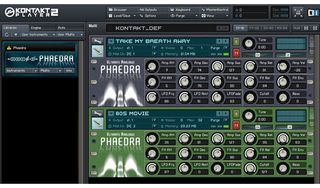 Could this be the most powerful one-stop analogue synth solution yet seen?

Phaedra is a new software sound module from Zero-G that samples a variety of acclaimed analogue synths. Powered by Native Instruments' Kontakt Player 2 engine, it comes with 4GB worth of sounds and 720 patches.

Developed over three years by producer Sam Spacey, Phaedra is built around some 20,000 samples, each of which has been edited and looped 'by hand'. In order to catch some of the 'randomness' of analogue synths, some of the loops are very long.

Patches are divided into ten categories: Synth 1, Synth 2, Bass, Leads, Pads, Sequences, FX, DnB, Synth Builder, Multis. The list of instruments sampled, meanwhile, includes an abundance of hardware classics: the sounds of the Mini Moog, Roland SH-101, Korg MS-20 and many others have all been captured.

Zero-G certainly seems to have confidence in Phaedra for it's claiming that it's "the most complete analogue synthesizer ever created".

Phaedra is compatible with Mac and PC and supports the VST, DXi, Audio Units and RTAS plug-in standards. It'll be available in January 2008 and will retail for $200/€169/£115.

For more information and a selection of audio demos, go to the Zero-G website.