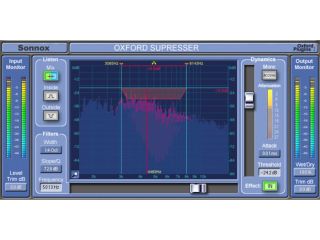 The SuprEsser puts de-essing and EQ in one plug-in.

Sonnox´s plug-ins are about as highly-regarded as they come, and the company has just released another one in the shape of the SuprEsser.

Combining a de-esser and a dynamic EQ, the new effect features both simple and advanced modes. The former enables you to make quick fixes, while the latter gives you increased functionality and is suitable for fine-tuning. A range of presets is included - these are designed to serve as useful starting points.

Users are presented with a large graphic display and three listen modes, so picking out problem frequencies and reducing or removing them should be easy. Extra features include automatic level tracking, linear phase filtering and a wet/dry blend control.

Available now as a Mac-compatible Audio Units, VST and RTAS plug-in, the Oxford SuprEsser will be finding its way onto the PC within the next few weeks. The full price is £180, though if you purchase it before June 30 it can be yours for £162.

Orders can be placed at the Sonnox website, where a 15-day demo can also be downloaded.