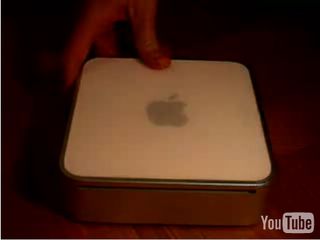 Will the new Mac mini really have a white top? We're not sure.

First there was the far-from-official picture, and now a video that purports to show a new version of Apple's Mac mini has appeared on video sharing websites.

Judging by the laminate wooden flooring, this short clip was filmed in the same location as the photo was taken.

You can watch it below, but having seen it a few times, we're actually less convinced of this 'new Mac mini's' authenticity now than we were when we just had a still image to look at.

For one thing, the lighting's not very good, which suggests that the clip's creators don't want you to look at the hardware too closely, and then there's the styling. A white top panel just doesn't seem very 'Apple 2009'.

Make up your own mind, though: is this a fake or the real deal?