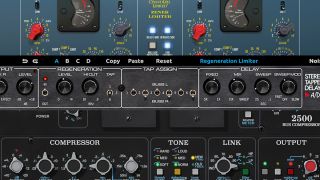 The news comes at the same time as Universal Audio announce Thunderbolt compatibility with Windows 10 systems.

Considered the best of the Paul Wolff-era API circuit designs, the API 2500 Bus Compressor is relied upon to deliver energy, movement, and tone to stereo mixes and subgroups.

Inspired by the iconic EMI TG limiters and rare RS168 from Abbey Road Studios, the Chandler Limited Zener Limiter is an evolution of the limiters used to track Pink Floyd and The Beatles. Softube emulated the Zener Limiter's circuits end-to-end, including its filter inductors, germanium transistors, transformers, and circuit nonlinearities.

All the plugins are available in the UAD Store for, the API 2500 Bus Compressor plug-in is priced $299, the Chandler Limited Zener Limited will also set you back $299, while the A/AD STD-1 costs $199.