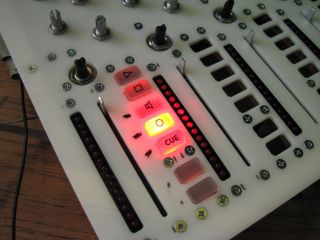 Ableton Live users should quickly be able to get to grips with the hardware's interface.

Given that Ableton Live is now a hugely popular live performance application, it's not really surprising that many of its fans have developed dedicated hardware controllers for it.

Create Digital Music reports that a new model from Serbian Sasa Djuric looks particularly promising - this is set to deliver a tactile interface that closely resembles that of the software.

Like so many 'homemade' controllers, this one was conceived because its creator wasn't satisfied with any of the devices currently on the market. It's based on the Mackie Control protocol - meaning that communication between the software and the hardware is bi-directional and that it can also be used with other software - and features a wheel for scratching purposes.

The hardware isn't quite finished yet - it may yet get a USB audio interface built into it - but we'd say that it's definitely worth keeping an eye on.