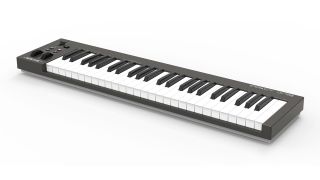 The new controllers offer more features than you might expect.

Fitting 49 or 61 full-size keys into a compact, narrow unit, Nektar's new controller models might be just the right fit for that space on your desk.

Nektar's making a name for itself with hardware that integrates easily with the software you're using, offers controllers that replace - to whatever extent - your mouse and QWERTY keyboard, allowing you to spend more time on what matters most. The Panorama P-series controllers feature comprehensive arrays of knobs and buttons, for example.

But the new iX controllers are more minimalist. Their compact design has room for only one fader, the usual two wheels, and five buttons in total, four of which are usable as transport controls. The iX series controllers make use of those same four transport buttons to do much more than just play, record and shuttle back and forth, though.

Nektar's DAW integration is still on the ticket, allowing you to use the controls for switching tracks and patches, controlling mixer volume and more. This functionality is currently up and running in Cubase, Reason, Reaper, Studio One, Sonar, Bitwig Studio, FL Studio, Digital Performer, GarageBand, Logic and Nuendo.

The iX models are said to be able to plug straight into any (Windows 7 or OS X 10.7) setup and just work, as well as having the ability to hook up to your iPad via the Camera Connection Kit.